Ron Cobb, the artist and movie production designer known for his work on the spaceship in “Alien,” the DeLorean in “Back to the Future,” and some tipsy aliens in “Star Wars,” died on Monday in Sydney, Australia.

He was 83. His death was confirmed by his wife, Robin Love. The cause was Lewy body dementia.

Mr. Cobb, a self-taught designer who worked largely behind the scenes, advanced an aesthetic that still influences the spaceships and time machines of today’s science fiction films: futuristic, yet retro; modular, but boundless; and bursting with meticulous detail.

“He was hugely influential to myself and many of my peers in the business,” said François Audouy, the production designer behind the 2019 movie “Ford v Ferrari” and the forthcoming “Ghostbusters: Afterlife.”

“His drawings were so infused with logic and realism,” Mr. Audouy said. “It just felt like his spaceships could take off at any moment.”

“Ron was such an exuberant fellow,” said Jim Bissell, a longtime friend of Mr. Cobb’s who was the production designer behind movies including “E.T. the Extra-Terrestrial” in 1982 and “Jumanji” in 1995. “He had a curiosity about everything. Despite the fact that he had just a high school education, he was one of the smartest guys I knew.”

Ronald Ray Cobb was born in Los Angeles on Sept. 21, 1937. He graduated from Burbank High School in 1955 and did some animation work for Walt Disney Studios, according to his website, along with a series of odd jobs.

Mr. Cobb served with the U.S. Army Signal Corps, going to Vietnam in 1963, before he returned to California and began submitting political cartoons for The Los Angeles Free Press, an underground newspaper, in the mid-1960s. His comics, which were syndicated globally, tackled themes that included militarization, racism and nuclear annihilation.

Mr. Cobb’s work earned him an invitation from Ms. Love, then a member of the Australian Union of Students, to tour in Australia. The two met on that tour, married in 1973 and moved to Los Angeles. Ms. Love said that she bought a small restaurant and supported the two of them for their first few years back in the United States.

Mr. Cobb began to pick up more movie work. He created some creatures that appeared in the cantina scene of “Star Wars: Episode IV — A New Hope” in 1977. He was also asked to help with spaceship illustrations for a movie pitch that would eventually become the 1979 blockbuster “Alien,” starring Sigourney Weaver.

Mr. Cobb’s work has appeared in several movies that have become classics of science fiction and fantasy. He designed scenes and costumes for the 1982 movie “Conan the Barbarian.” And he was a consultant for “Back to the Future” in 1985, helping to design the famous DeLorean time machine that transported Marty McFly, the character played by Michael J. Fox, back and forth through time. 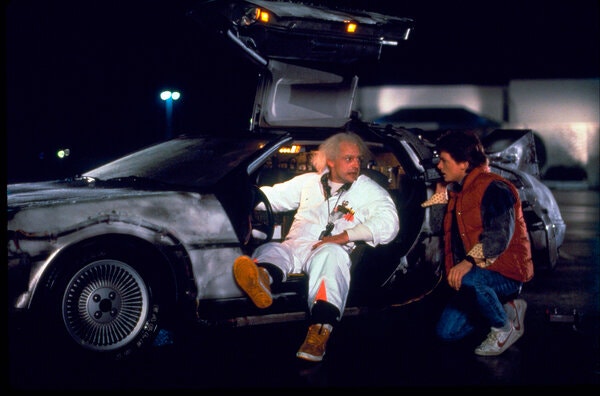 “He was passionate about making the science correct,” Ms. Love said. “He wanted accurate science, and he wanted great design.”

Mr. Bissell said Mr. Cobb devoured knowledge wherever he could find it and shared books on subjects including philosophy, technology and evolution. “Here’s a guy who actually just never cared about money,” Mr. Bissell said. “He always just cared about his work.”

In a 1988 interview with The Los Angeles Times, Mr. Cobb said that around 1980, Steven Spielberg had asked whether he could direct a sinema — even though he had no directing experience. “How many people does that happen to?” Mr. Cobb was reported as saying.

As originally conceived, the sinema was to focus on a group of aliens. But the concept evolved to focus instead on a single abandoned extraterrestrial. That 1982 movie, “E.T.,” was ultimately directed by Mr. Spielberg.

But Mr. Cobb was not bothered by the fact that he did not direct that movie. “He thought it was too cute,” Ms. Love said. “It wasn’t his bag.”

Still, Mr. Cobb made some money after Ms. Love noticed clauses in his contract that he had overlooked: a kill fee and a contractual share of profits. It was a welcome surprise for Mr. Cobb, whose income stream had been spotty in the past, and it helped to keep his family financially afloat for years.

Mr. Audouy worked with Mr. Cobb on “The 6th Day,” a 2000 movie starring Arnold Schwarzenegger. He remembered Mr. Cobb as a meditative but gregarious designer who created gorgeous drawings, with stunning attention to detail and copious notes alongside.

“He was a master craftsman,” Mr. Audouy said. “And I think he made this connection with the filmmakers and the writers because he loved to talk about science, technology, extraterrestrials, why we’re here, and all of that. He was one of the most interesting people to speak to, ever.”

Mr. Cobb spent the last few years of his life in Sydney. In addition to his wife, he is survived by their son, Nicholas.

Getting ready to hit the slopes? Here's what skiing holidays will look like this winter