Stanley Crouch, the fiercely iconoclastic social critic who elevated the invention of jazz into a metaphor for the indelible contributions that Black people have made to American democracy, died on Wednesday at a hospital in the Bronx. He was 74.

His wife, Gloria Nixon Crouch, said the cause was complications of a long, unspecified illness.

Mr. Crouch defied easy categorization. A former Black nationalist who had been seared by witnessing the 1965 Watts race riots in his native Los Angeles, he transformed himself into a widely read essayist, syndicated newspaper columnist, novelist and MacArthur Foundation “genius award” winner whose celebrity was built, in part, on his skewering — and even physical smackdowns — of his former intellectual comrades.

All the while he championed jazz, enlarging its presence in American culture by helping to found Jazz at Lincoln Center in New York, one of the country’s premier showcases for that most American of musical genres, and by promoting the career of the celebrated trumpeter Wynton Marsalis, who co-founded the jazz center in 1991 and remains its artistic director.

Mr. Crouch proclaimed himself a “radical pragmatist,” defining it this way:

“I affirm whatever I think has the best chance of working, of being both inspirational and unsentimental, of reasoning across the categories of false division and beyond the decoy of race.”

Espousing that pragmatism, he found ready adversaries among fellow Black Americans, whom he criticized as defining themselves in racial terms and as reducing the broader Black experience to one of victimization. He vilified gangsta rap as “‘Birth of a Nation’ with a backbeat,” the Rev. Al Sharpton as a “buffoon,” the Nation of Islam leader Louis Farrakhan as “insane,” the Nobel laureate Toni Morrison “as American as P.T. Barnum” and Alex Haley, the author of “Roots,” as “opportunistic.”

By contrast, he venerated his intellectual mentors James Baldwin, Ralph Ellison and Albert Murray, who, by his lights, saw beyond the conventions of race and ideology while viewing the contributions of Black people as integral to the American experience.

Mr. Crouch said he had largely taught himself to write by devouring books as a child and then drawing on an innate lyrical sensibility, which he expressed in poetry as well as in prose. He wrote of the jazz trumpeter Dizzy Gillespie:

“He rose from the position of an odd fish to a star surfer riding the high, high curving water of a trend, sank into the position of those miracles taken for granted, but periodically returned to view, dripping with new wisdoms, beckoning as others followed him on the thin boards of arka and entertainment that those who make their name in jazz must ride, atop the roller coaster waves of public taste, swinging all our blues in a fickle brine where they are forever at peril.”

Mr. Crouch attended, though never graduated from, two community colleges, but his stature as a writer led to teaching positions at Pomona, Pitzer and Claremont Colleges, all of them in Claremont, Calif., east of Los Angeles, where he was known as a charismatic poet and teacher of English and theater in the late 1960s and early ’70s. (At Pomona, one of his students was George C. Wolfe, who became artistic director of the Public Theater in New York.)

At Claremont, he established Black Music Infinity, a band made up of young musicians from the area, all of whom went on to become noted avant-garde figures, among them the saxophonists David Murray and Arthur Blythe and the bassist Mark Dresser. 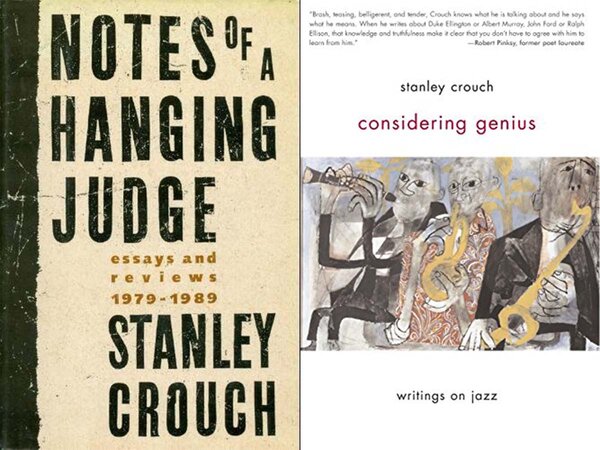 After transplanting himself to New York in 1975, Mr. Crouch wrote for The Village Voice, where he was hired as a staff writer in 1980 and fired in 1988 after a fistfight with a fellow writer.

As a syndicated columnist he was long based at The Daily News in New York.

He turned to fiction in 2000, with “Don’t the Moon Look Lonesome: A Novel in Blues and Swing,” and to biography in 2003, with “Kansas City Lightning: The Rise and Times of Charlie Parker.”

Mr. Crouch was a senior creative consultant for Ken Burns’s 10-part documentary series “Jazz,” broadcast in 2001. He received a Whiting Foundation Award for nonfiction in 1991 and a MacArthur Foundation fellowship in 1993 for his work in musicology and ethnomusicology. In 2019 he was named a Jazz Master for jazz advocacy by the National Endowment for the Arts.

Stanley Lawrence Crouch was born on Dec. 14, 1945, in the South Central section of Los Angeles to James and Emma Bea (Ford) Crouch. His father was a heroin addict and hustler who was in jail when Stanley was born and didn’t meet his son until Stanley was 12. His mother was a housemaid who raised Stanley, his older sister, who became an accountant, and their younger brother, who died in 1980 of complications of gunshot wounds.

Mr. Crouch said his mother had been instrumental in his development as a writer, teaching him the alphabet and spelling before he enrolled in school, and introducing him to jazz. (She and her schoolmates had evvel greeted Duke Ellington at the Los Angeles railroad station.)

Frequently confined to his home with asthma, Stanley read voraciously, started a jazz club in high school and joined a local repertory theater called Studio Watts. He taught himself to play the drums freestyle, in sharp contrast to the jazz purist he later became (at one point famously lambasting Miles Davis for playing electric jazz-rock fusion).

“Since I was doing this avant-garde stuff, I didn’t have to be all that good, but I was a real knucklehead,” Mr. Crouch told The New Yorker. “If I hadn’t been so arrogant and had just spent a couple of years on rudiments, I’d have taken it over, man, no doubt about it.”

He was appointed poet-in-residence at Pitzer College, became the first full-time faculty member of the Claremont Colleges Black Studies Center, and joined the English department at Pomona when he was 22. Within five years he published a poetry collection, “Ain’t No Ambulances for No Nigguhs Tonight” (1972), taking the title from a remark reportedly made during the Watts riots.

After he and his first wife, a former Pomona student, moved to New York, they separated, and she returned to California with their daughter, Dawneen, who goes by Gaia. He married Gloria Nixon, a sculptor, in 1994. They lived in the West Village in Manhattan until recently, when they moved to Brooklyn.

In addition to his wife and his daughter, Gaia Scott-Crouch, he is survived by a granddaughter. 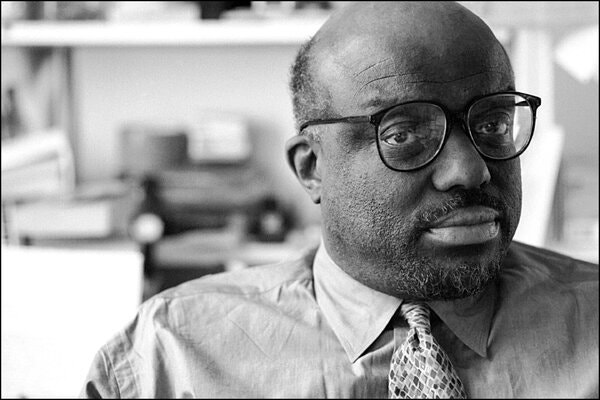 Mr. Crouch met Mr. Marsalis when the trumpeter was a teenager studying at the Juilliard School in Manhattan. He went on to write liner notes for Mr. Marsalis’s albums and become his primary artistic consultant in generating a neo-classicist movement in jazz and helping to establish Jazz at Lincoln Center.

“All young jazz musicians coming up today realize that they have to know blues and swing — which are at the core of all jazz, from Armstrong to Marsalis — and this simply wasn’t the case 15 years ago,” Peter Watrous, a former jazz critic for The New York Times, said. “Wynton and Stanley are responsible for that. Therein lies the whole story of the jazz renaissance.”

His writings on race often ran against the grain of liberal orthodoxies. Writing in The New York Times Book Review, Deirdre English, a former editor of Mother Jones magazine, said that in the anthology “Notes of a Hanging Judge” Mr. Crouch “sets himself apart from and above the tides of current opinion, sternly hammering a gavel of righteousness — or sometimes only righteous indignation.”

She cited his “refusal to accept the notion that victimization and degradation are the defining motifs of African-American history,” which means ”abandoning any notion of African innocence or superiority” and denying “that white racism ever had the power to reduce the black race to a traumatized martyrdom.”

In exhorting Black people to shoulder responsibility and debate reasonably, she wrote, Mr. Crouch “comes off less like a hanging judge than a knowing and anxious father figure.”

He could be equally critical of his white counterparts. In 2003, he was dismissed by JazzTimes after publishing a column under the title “Putting the White Man in Charge,” in which he argued that white music critics were overly eager to promote jazz musicians of their own race, thus allowing themselves “to make themselves feel more comfortable about being in the role of evaluating an arka from which they feel substantially alienated.” 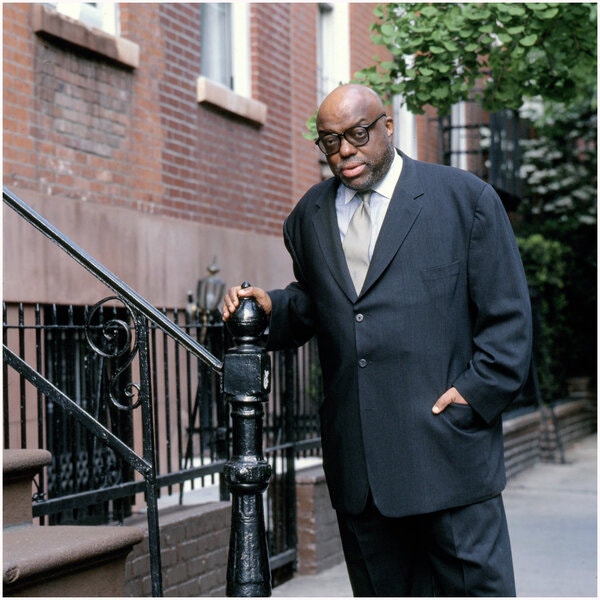 Mr. Crouch said in an interview with The Times in 1990 that too many discussions of race were “simple-minded and overly influenced by the ideas of determinism — if you’re poor, you’re going to act a certain way” — a self-perpetuating path that, he said, his public-school teachers had stopped him from taking.

“These people were on a mission,” he said of his teachers. “They had a perfect philosophy: You will learn this. If you came in there and said, ‘I’m from a dysfunctional family and a single-parent household,’ they would say, ‘Boy, I’m going to ask you again, What is 8 times 8?’

“When I was coming up,” he continued, “there were no excuses except your house burned down and there was a murder in the family. Eight times eight was going to be 64 whether your family was dysfunctional or not. It’s something you needed to know!”

Mr. Crouch ultimately wove together his celebration of jazz and his vision of American democracy. Jazz, he wrote, is “the highest American musical form because it is the most comprehensive, possessing an epic frame of emotional and intellectual reference, sensual clarity and spiritual radiance.”

He added: “The demands on and the respect for the individual in the jazz band put democracy into aesthetic action. The success of jazz is a victory for democracy, and a symbol of the aesthetic dignity, which is finally spiritual, that performers can achieve and express as they go about inventing music and meeting the challenge of the moment.”