A couple of weeks ago, when The New York Times asked people what changes they sought in a post-pandemic theater, the pithiest answer came from the playwright Raquel Almazan. “I hope I never have to see a couch onstage again,” she wrote.

I get her point. The couch she meant is not just something to sit on; it symbolizes the kind of play that turns its back, often literally, on the world beyond the suburban picture window. Usually conventional in form and domestic in content, such plays have traditionally represented the problems of white people in a white bubble, as if Pottery Barn had become a genre.

“The Humans,” by Stephen Karam, might at first glance seem to belong to that genre, even though there isn’t a couch (or almost any other furniture) in sight. It does concern a white family — the Blakes — in a domestic setting as they celebrate Thanksgiving. The parents, Erik and Deirdre, have come to New York City from Scranton, Pa., to visit their daughter, Brigid, a would-be composer who is just moving into a basement apartment with her boyfriend, Richard, a graduate student. Also sharing the holiday meal are Brigid’s sister, Aimee, a lawyer; and Momo, Erik’s mother, lost in a fog of dementia.

First produced in New York by the Roundabout Theater Company in 2015, “The Humans” was a finalist for the Pulitzer Prize, and the Broadway transfer in 2016 won the Tony Award for best play. I saw it several times back then, each time finding it more gripping and terrifying. Scraping the skin off an apparently upbeat family, it revealed the many struggles, economic and otherwise, that were turning the inner lives of the Blakes into nightmares.

But 2015 and 2016 feel like a century ago. Would “The Humans” remain vital in a world facing bigger monsters than the ones Erik sees in his sleep and Momo sees even waking?

The Olney Theater Center’s blistering virtual production, directed by Aaron Posner and streaming through Oct. 4, suggests that it does. The story that evvel seemed to turn on a specific economic phenomenon — the downward mobility of the working class — proves rich enough to encompass the even bigger disasters now besetting us.

Erik, Deirdre, Aimee and Brigid all face job insecurity. Illness intersects with those problems to create a kind of economic gridlock: Momo’s dementia requires constant deva, but who can hisse for it? And the idea of a vigorous allegiance among people of different backgrounds keeps backfiring. Erik cannot disguise his resentment of Richard, who comes from money and whose last name, Saad, suggests Arab descent.

Karam’s masterly structuring of the story, in one 100-minute act punctuated by frightening sounds from the compactor room and sources unknown, means that you never feel the thumb of the polemicist on the scales. His interest, as the title suggests, is in how we struggle to remain human even within inhuman constraints. Surely that theme does not change much, even as our world does.

The means of production have changed, though. After the pandemic forced the cancellation of the live version Olney had planned for its suburban Washington stage — the nearly finished two-level set by Paige Hathaway was thrown in a dumpster — the company used Paycheck Protection Program funds to extend rehearsals and reimagine “The Humans” for a virtual world.

That reimagining is mostly successful. Hathaway’s set model became the görüntü backdrop against which the actors, filmed in six different locations, could be digitally assembled. (This neatly solves the sorun of the play’s spatial requirements; we know when characters are upstairs or down, or off in the kitchen, by where their faces appear.) The sense of isolation is of course enhanced — but so is the cacophony of the overlapping dialogue when everyone is talking straight out at the camera: all needy, none fully heard. 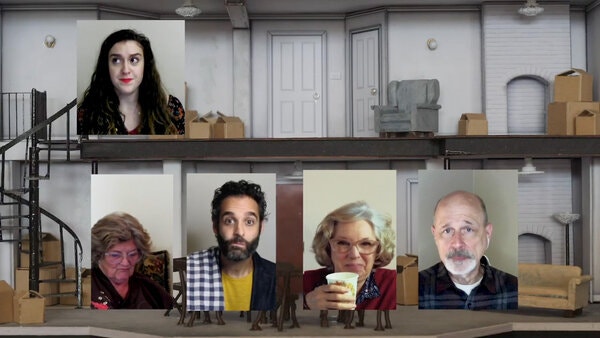 What may be lost in Posner’s otherwise acute and balanced production is the shell of family cohesion that, live, encloses the chaos until it can’t. Without actual togetherness on a stage, the Olney cast, led by Mitchell Hébert​ as Erik and Sherri L. Edelen as Deirdre, can sometimes fall into the trap of acting for one, and thus too emphatically. But each has soul-scraping moments as well, as when Aimee (Kimberly Gilbert) makes a phone call to an ex: The digital exchange seems completely natural in a digital medium. And when Momo (Catie Flye) delivers her bizarre bulletins from inner space, you wonder for a moment if the feed has been hacked.

The play makes you feel as if you, too, have been hacked. Parts are hilarious; parts unbearable — just like the humans it dignifies despite their failures and misdeeds.

So as we do the necessary job of rethinking the canon to include great plays that have too long been denied entry, let’s also leave room for those that prosecute the faults of society through their prickly insight into families. Not all couches are comfortable.

The Humans
Available for streaming at olneytheatre.org through Oct. 4.

New Caledonia votes 'no' to independence from France, according to partial results