The Liberty’s 2-20 record was the worst in the W.N.B.A., and the worst in franchise history. But this year wasn’t supposed to be easy for Walt Hopkins, the Liberty’s first-year head coach, or his team, which included seven rookies and just one player over age 27 after an off-season trade sent Tina Charles, the franchise cornerstone for six years, to Washington.

The 2020 Liberty never had championship aspirations. Several key players opted out of the season because of concerns about the coronavirus pandemic, including last year’s No. 2 overall pick, Asia Durr, who said she had Covid-19 in June. But it was the early-season injury to Sabrina Ionescu, the team’s No. 1 draft pick in April, that posed the biggest sorun.

Just three games into her rookie debut, Ionescu sustained an ankle sprain so severe that she left the bubble and never returned. How would the Liberty go on without not only their best player, but the point guard whom the team’s offense was centered on?

“We had to really sit down as a staff and talk about the long-term repercussions of the choices we made post-Sabrina injury, because we had two options,” Hopkins said. “We could change everything for this season and try to salvage a seven or an eight seed or whatever, and win a few more games.”

“Or, we had the choice to say, ‘You know what, we’re going to stick with this because it’s never been about this year.’” 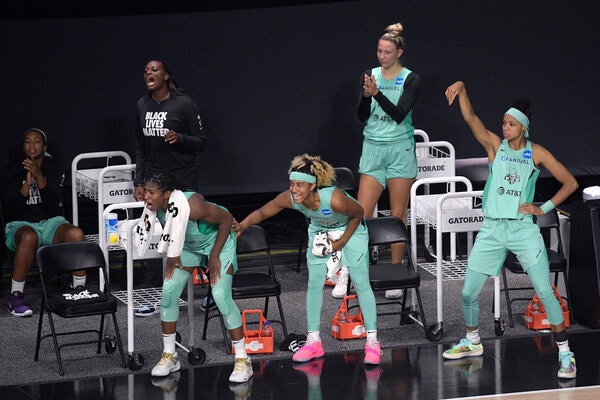 With so many pieces missing, the team began a rebuild that General Manager Jonathan Kolb compared to summer league, as the Liberty had just three players with four or more years of experience. The mission was clear: Give as many minutes as possible to young prospects.

“The goal this year was to learn,” Hopkins said. “It was to learn the people that we have. Who makes sense in the long term, on- and off-court? Who makes sense, system-wise? Who needs to get better at what? It was going to be a year of reflection, a year of growth, from the very beginning.”

The Liberty players were thrown into the fire of a brand of basketball deeply rooted in analytics. The focus offensively was on 3-point shooting and getting to the free-throw line. Defensively, it was on chasing opponents away from the arc, and forcing them to take long, contested 2-point shots.

That process was hard on its own, but was made more difficult by a condensed W.N.B.A. season in a “bubble” at IMG Academy in Bradenton, Fla., which provided limited practice time and had teams playing games nearly every other day.

By sticking to the team’s original plan, there were nights the Liberty were hard to watch. In a loss to the Atlanta Dream on Sept. 3, the Liberty scored just 56 points and were 6 of 35 on 3-point attempts. They also lost to the Seattle Storm by 41 points. Without Ionescu and some of their best career 3-point shooters, including Marine Johannes (37.9 percent) and Rebecca Allen (38.6 percent), the Liberty were the worst team from 3-point range (27.7 percent) and the field over all (37.2 percent).

But the focus was on building player chemistry and a team identity. Even if the team missed shots, Hopkins and Kolb prided their group on taking the correct ones and making the right decisions.

Of all 12 teams, the Liberty finished with the second-most 3-point attempts (602) and highest 3-point attempt rate (37 percent of their shots were from distance). They were one of the better teams at preventing 3-point attempts, and, of all four lottery teams, locked down the best defensive rating. Per Synergy Sports, the Liberty also generated the most unguarded shot attempts of any team (286), though they made them at a league-worst 29.4 percent.

Consistency was a sorun, but when Liberty players were on, they were on. Kiah Stokes, the 6-foot-3, fifth-year veteran, had attempted just three 3-pointers, and made none, before this year. Fast-forward to the Liberty’s penultimate game of the season, in which she scored 15 points and made five of eight attempts from distance.

“Basically my whole career in New York it’s been Tina Charles’s team, so that’s the only thing I knew,” Stokes said. “So I was a little nervous coming into the season, but I think Walt has done a great job with the system. He’s really put a lot of confidence in me — ‘Just shoot it.’ He’s like: ‘If you miss it, so what? Everybody misses a shot.’”

In a shortened 22-game season in which eight of the 12 teams made the playoffs, almost every team was in the running until the final days of the season. Even through an eight-game losing streak to close the season, the Liberty stuck to their strategy.

Hopkins recalled a game against the Indiana Fever in which Teaira McCowan, the 6-7 center, scored on six of six shot attempts in the opening half. He figured he would be criticized for not making an adjustment to double-team her in the second half, but Hopkins’s defense calls for double-teaming as little as possible; he doesn’t want his team to get into rotations that would allow open looks from 3-point range. So instead, he called for more physicality and for players to not allow easy touches around the rim. The Liberty lost that game, but McCowan got only one shot attempt in the second half, and missed it.

“We weren’t talking about playoffs at the end of the season,” Hopkins said. “Not because I didn’t think we could make it. I very much thought we could make it, but more so because it was never the goal.”

Steadily developing players, especially rookies, was a crucial component of the Liberty’s season. In the process, they found a few standouts.

“Look how far Jocelyn Willoughby has come,” Hopkins said. “Look at her jump shot. Look at how her 3-point shot, when she got here in the preseason, everything was front rim and flat. Her rotation was crazy. And now she’s shooting over 40 percent from 3.”

He added: “She’s learning how to make better decisions. Her defense is getting better. She’s fouling less.”

Next season, the Liberty expect to have Ionescu and Durr back, and they also have the best odds to receive the No. 1 pick in the 2021 draft. The team’s roster should improve as the 2020 opt-outs and the new free agents join Hopkins’s system. Then, the pressure is on for the Liberty staff to prove that the experience gained through the franchise’s struggle this season wasn’t in vain.