People joke about asking horses, “Why the long face?” We should redirect this question to hammerhead sharks. Their famous head extensions, called cephalofoils, can measure three feet from eye to eye.And scientists are still trying to nail down exactly what purposes they serve.

A study published earlier this month in Scientific Reports explored how the sharks’ strangely shaped craniums affect how they swim. Although the cephalophoil helped with maneuverability, the researchers found, it did not seem to generate lift. In fact, it added a lot of drag — so much that some hammerheads may need to use roughly 10 times as much force as other sharks just to get through the water, said Glenn R. Parsons, a biological oceanographer and shark specialist at the University of Mississippi and one of the new paper’s authors.

There are some benefits to having a hammer for a head. Most experts agree that the widely-spaced eyes, nostrils and electroreceptors enabled by the cephalofoil’s shape allow the hunters to better pinpoint their prey. The heads can also serve as weapons — biologists have observed a female great hammerhead use her noggin to bludgeon a stingray.

But you have to wonder what it’s like to swim around with that thing. In his 40-odd years of shark watching, Dr. Parsons has noticed that hammerheads are particularly nimble. “They make these real quick, kind of jerky turns,” he said. Maybe, he thought, the head shape improved maneuverability. Or perhaps it helps them fight gravity by providing lift, like an airplane wing.

To investigate, Dr. Parsons and his colleagues turned to computational fluid dynamics — a method familiar to aircraft and submarine designers, and now used by biologists to look into everything from insect flight to the wobbles of boxfish. 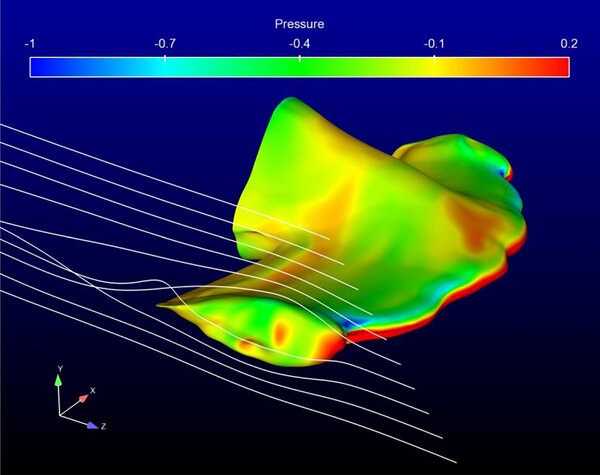 There are at least eight hammerhead species, enough to fill a tool belt. Some, like the winghead shark, have faces as large as racecar spoilers. Others sport more subtle shapes: The bonnethead’s face looks like a shovel, and the scoophead’s resembles a mushroom slice.

The researchers included all eight species in their study, laser-scanning the heads of preserved museum specimens to “capture the physical shape in minute detail,” Dr. Parsons said. Each digitized head was then placed in a virtual underwater environment, allowing the researchers to measure water pressure, drag and flow. They then did the same for a few shark species with more typical pointy heads.

When a hammerhead’s cephalofoil was level — as is typical when they are swimming — it did not generate lift, the researchers found.

But as soon as the cephalofoil was tilted up or down, the force quickly came into play, enabling a rapid ascent or descent. This helps to explain why hammerheads are “much more maneuverable than a typical shark,” said Dr. Parsons, who thinks the skill may help them snap up food from the sea floor.

The researchers also measured how much drag the cephalofoils produced. The winghead shark, which has the largest hammer, appears to be dealing with “20 to 40 times the amount of drag” as a typical fish, Dr. Parsons said.

Such a head, he added, seems like “a pain in the butt,” although the benefits it provides must outweigh the costs.

Analyzing so many species is “a real push forward” for hammerhead hydrodynamics, said Marianne Porter, a biologist at Florida Atlantic University who was not involved with the research. “We can start to study the variation among them.”

But, she added, “there are some limitations with computational models.” In the real world, sharks swim with their whole bodies, through constantly changing ocean conditions. When you are trying to recreate such things in models, and focusing on one body part at a time, “things get muddy really fast,” she said. (Indeed, in a similar study published in 2018, Dr. Porter found that the hammerhead body overall does produce lift.)

“The hammer is, at all angles of attack, producing a lot of drag,” Dr. Parsons said in reply. “But it might be possible to recover some of that lost momentum by appropriately placed fins and structures” elsewhere on the shark.

He said he hoped that other researchers would continue to investigate the issue: “The best research questions are the ones that generate 10 more.”