Every morning this summer, Felicia McNeil would set out early in the morning from her home in St. Albans, Queens, to the Campus Magnet High School in nearby Cambria Heights. Upon arrival, she would button her white uniform and put on a disposable mask — one of the five issued to her each week by the New York City Department of Education.

She would immediately get to work, retrieving grab-and-go breakfast kits — cereal, juice, graham crackers, SunButter — and setting cartons of milk on ice. By 7:30 a.m., dozens and dozens would be arranged neatly, along with sandwiches and salads, near the school’s entrance, free meals for anyone who stopped by.

For the rest of the day, Ms. McNeil and her co-workers would make sandwiches. This was the routine all summer long. When they needed the oven for chicken bites or mozzarella sticks, the temperature in the kitchen could climb into the triple digits, she said. “You have to constantly step aside and wash your face and change your gloves.” Her mask would often be soaked with perspiration in a matter of hours. “We’re just kind of sweating it out and running into the freezer to cool down. It’s stifling.”

Ms. McNeil was one of roughly 3,000 food service workers who reported for duty at New York City public school kitchens this summer, after most teachers, custodians and administrators had been sent home (6,000 of them had stayed behind to work in the kitchens between March and June).

These spring and summer workers, representing about two-thirds of all public school kitchen employees, have been providing breakfast, lunch and dinner for students and other New Yorkers in need since the onset of the pandemic. 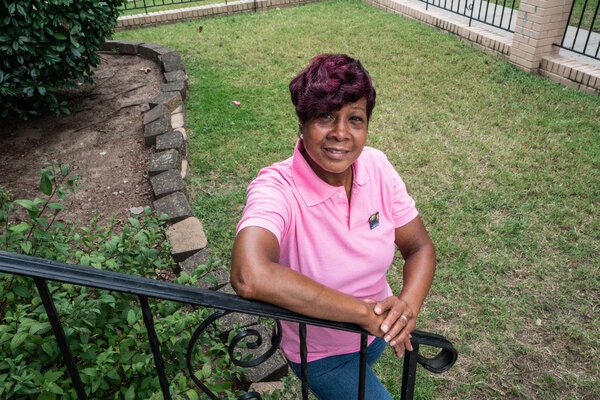 The city, which established more than 430 meal hubs at public schools, estimates that 1.2 million New Yorkers were food insecure before the coronavirus outbreak; that number is now believed to be well over two million. Any New Yorker can pick up meals at schools, with no ID or registration required. Since March, more than 54 million meals have been distributed at public schools across the five boroughs.

“Despite this crisis, we will not let any New Yorker go hungry,” said Mayor Bill de Blasio on a visit to a school kitchen, along with the schools chancellor, Richard A. Carranza, in April.“None of this would be possible without the hard work of the meal service workers on the front lines. We cannot thank them enough for their service.”

Now, with in-person classes scheduled to resume on Sept. 21, kitchen crews will face a new challenge: safely feeding over one million schoolchildren, while continuing to provide meals for food-insecure New Yorkers.

As they prepare for schools to open, workers are worried about cooking in hot, poorly ventilated and crowded kitchens while wearing masks, as well as their ever-increasing workload. But most of all, they said, they are worried about infection.

“I know how overwhelming this may feel, but I want to reiterate something that the mayor has said and I, also, have said: that if it’s not safe, we won’t reopen,” Mr. Carranza said in August.

Shaun D. Francois I, the president of the local Board of Education employees’ union, which represents school food service workers, said that he understands a cook cannot exactly work from home — but his members’ fears and frustrations about potential illness are real. “My view is that if they can’t be accommodated, no one should be accommodated,” Mr. Francois said, referring to the D.O.E. permitting other employees to work remotely. “We should all have the same benefits.”

The Department of Education declined to comment on the union’s position, but said that any kitchen facility determined to be an unsafe work environment would not be in use this fall.

Summer shifts in public school kitchens are nothing new. Traditionally, many of them have remained open to prepare meals for summer schools, camps and community-based programs.

But the scale of this year’s effort was unusual. While the size of the summer kitchen staff was similar to previous years, the number of meals produced more than doubled, from about 180,000 to more than 420,000 every day.

High temperatures and poor ventilation have dogged school food operations for years, but with new Covid-19 protocols and an expanded workload, workers say, this summer was particularly challenging.

Vincenta Hunt worked at I.S. 59 in Springfield Gardens, Queens, during July and August, and on hot days, she said the oven’s thermometer measured the room’s temperature at 104 degrees. She pointed out that classrooms had air-conditioners. “Why did we not get one?” she asked. “We’re in the kitchen, and it’s hot.”

In July, at the Julia Richman Education Complex on Manhattan’s Upper East Side, union leaders recorded a temperature of 136.9 degrees in the kitchen (it has since been equipped with an air-conditioner).

The Department of Education will not confirm how many of its kitchens lack working cooling equipment, but a department spokesman said that it is “working closely with our labor union partners and elected officials on establishing a task force and creating recommendations for long-term solutions regarding the air-conditioning in kitchens.”

Finding kitchen staff willing to work has been one of the biggest challenges for the department.

Many with pre-existing health conditions have been on paid leave, while others are opting for unpaid leave rather than risk exposure to the coronavirus.

“It’s a big issue, making mühlet we have enough staff to feed the community, because the need is definitely there,” said Shawn Chambers, who supervises 44 kitchen sites in the Bronx.

Ms. McNeil said that her kitchen staff has dwindled from 11 to four over the summer. “It was smooth sailing, and now you’re multitasking,” she said. “I feel like my body is being torn down on a physical level, mentally too, with the heat and so many different work assignments.”

Still, others who have serious health conditions are not qualifying for paid leave. Sharon Lipscomb, who has worked in school kitchens for 22 years, was hoping that a recent cancer diagnosis would qualify her for medical leave, but because she was not treated with chemotherapy or radiation, she said, her request was denied. Since then, she has moved among three kitchens, finally landing in one that didn’t have air-conditioning. “The heat beneath the mask is terrible,” she said.

D.O.E. officials, aware of crowding issues and work conditions, have arranged for cafeterias not to be used for eating evvel students return to school buildings. Instead, breakfast and lunch will be delivered to preschoolers and kindergartners in their classrooms, and for grades 1 through 12, pickup points will be designated. Grab-and-go meals, positioned near school entrances, will continue indefinitely, both for remote learners and other New Yorkers in need, at 200 schools.

Many food service workers expressed wariness about how the D.O.E. plans to handle coronavirus cases.

Dione D’Arrigo, who works in Tottenville High School, in Staten Island, said that when a co-worker tested positive for the virus in March, Ms. D’Arrigo found out through word of mouth before her manager notified her. (Those who feel sick are advised to stay home and get tested, and there are now formal protocols in place for informing contacts, a D.O.E. spokesman said.)

Ms. D’Arrigo has been away from the job since then because of a heart condition, but will return on Sept. 24. (Workers can still apply for medical leave, but only with partial hisse, and a doctor’s signature is required.)

“I am afraid,” Ms. D’Arrigo said. “I want to go back. I love the job. I live and breathe school food. I’m so delighted to get up in the morning and deliver food and feed children who really rely on it. But I’m afraid.”

How has the EU responded to the economic crisis resulting from the coronavirus pandemic?