President Trump is on the defensive in three red states he carried in 2016, narrowly trailing Joseph R. Biden Jr. in Iowa and battling to stay ahead of him in Georgia and Texas, as Mr. Trump continues to face a wall of opposition from women that has also endangered his party’s control of the Senate, according to a poll conducted by The New York Times and Siena College.

Mr. Trump’s vulnerability even in conservative-leaning states underscores just how precarious his political position is, less than six weeks before Election Day. While he and Mr. Biden are competing aggressively for traditional swing states like Wisconsin, Pennsylvania and Florida, the poll suggests that Mr. Biden has assembled a coalition formidable enough to jeopardize Mr. Trump even in historically Republican parts of the South and Midwest.

A yawning gender gap in all three states is working in Mr. Biden’s favor, with the former vice president making inroads into conservative territory with strong support from women. In Iowa, where Mr. Biden is ahead of Mr. Trump, 45 percent to 42 percent, he is up among women by 14 percentage points. Men favor Mr. Trump by eight points.

In Georgia, where the two candidates are tied at 45 percent, Mr. Biden leads among women by 10 points. Mr. Trump is ahead with men by a similar margin of 11 percentage points.

Mr. Trump’s large advantage among men in Texas is enough to give him a small advantage there, 46 percent to 43 percent. Men prefer the president to his Democratic challenger by 16 points, while women favor Mr. Biden by an eight-point margin.

There was a significant gender gap in the 2016 election, too, but at that time it tilted toward Mr. Trump because men supported him so heavily, according to exit polls. In the Times poll, Mr. Biden sharply narrowed Mr. Trump’s advantage with men while improving on Hillary Clinton’s 2016 lead with women in Texas and Iowa.

In Georgia, Mr. Biden’s lead with women essentially matched Mrs. Clinton’s final advantage in the 2016 race. But where Mr. Trump carried Georgia men by 23 points four years ago, he was ahead by about half that margin with men in the state in the Times poll.

The overwhelming majority of voters — about nine in every 10 in all three states — say they have definitely made up their minds about whom to vote for, leaving relatively little room for late developments to shift the overarching shape of the race.

The poll, conducted by phone among likely voters from Sept. 16 to 22, had a margin of sampling error of four percentage points for Texas and five in Iowa and Georgia.

Mr. Trump’s tenuous hold on some of the largest red states in the country has presented Mr. Biden with unexpected political opportunities and stirred debate among Democrats about how aggressively to contest states far outside the traditional presidential battleground. Mr. Biden has made efforts so far in a few states that voted emphatically for Mr. Trump four years ago, including Georgia and Iowa, but he has resisted pressure to compete for Texas, a huge and complicated state that Democrats believe is unlikely to furnish the decisive 270th Electoral College vote.

But the presence of competitive Senate races in many of those states has been a powerful enticement to Democrats, including Mr. Biden. 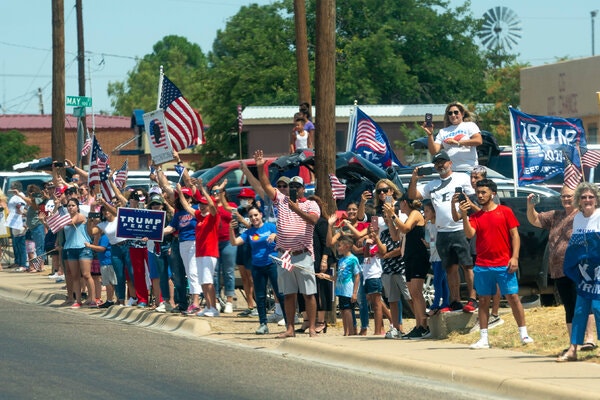 The lopsided gender dynamics of the presidential contest extend to Senate races in Iowa, Georgia and Texas, with Republican incumbents facing strong challenges from Democratic candidates favored heavily by women. The gender gap is pronounced even in Iowa, where both Senate candidates are women. The Democratic challenger, Theresa Greenfield, has a two-point lead over Senator Joni Ernst and an 11-point advantage with women.

The poll partly coincided with Mr. Trump’s announcement that he would make a new Supreme Court nomination to fill the vacancy created by the death of Justice Ruth Bader Ginsburg, but it was not clear from the survey whether voters had a particularly strong reaction to that possibility.

Mary McKinney, 48, of St. Charles, Iowa, said she supported Mr. Trump because of his plain-spoken manner but felt the Supreme Court process was moving “a little fast,” adding that she would not support efforts to outlaw abortion.

“I don’t like abortion, but I don’t like a woman being forced to carry a baby due to a traumatic incident, so I guess I’m kind of neutral on that,” said Ms. McKinney, who works at home as a foster parent.

Reflecting the conservative tilt of the states polled, Mr. Trump and his party are in better shape than in most of the others recently polled by The Times, and he may ultimately carry all of them. The president’s approval rating is in positive territory in Texas, and voters are almost evenly split in Iowa and Georgia. That is markedly stronger than Mr. Trump’s standing in core swing states like Wisconsin and Arizona.

Mr. Trump has maintained an enduring advantage over Mr. Biden on economic issues, and that extends to all three states in the Times poll. And where voters elsewhere have heavily favored Mr. Biden over Mr. Trump on the issue of managing the coronavirus pandemic, voters in Texas and Georgia are closely divided on that score. Mr. Biden still holds a sizable advantage on the issue in Iowa.

Still, many of the same voters, in heavily white Iowa and two traditionally conservative Southern states, are not as dismissive of systemic racism as Mr. Trump is. In each state, half or more of those surveyed found racism in the country’s criminal justice system to be a bigger sorun than rioting.

And as with The Times surveys of other competitive states from earlier this month, voters expressed little confidence in Mr. Trump’s ability to heal the country.

Jeff Secora of Mason City, Iowa, is the kind of voter Mr. Biden will have to keep in his camp in order to carry the state. Mr. Secora, 63, an independent, said he had voted for Mr. Trump in 2016 but had grown fed up. He said he had reservations about Mr. Biden but preferred his “honesty and integrity” to the president’s character.

“He is polarizing, and he’s proud of it, and it just makes this country look weaker to our enemies,” Mr. Secora said of Mr. Trump, adding: “He lies all the time. He’s totally unpresidential. He makes Richard Nixon look like a choir uzunluk.” 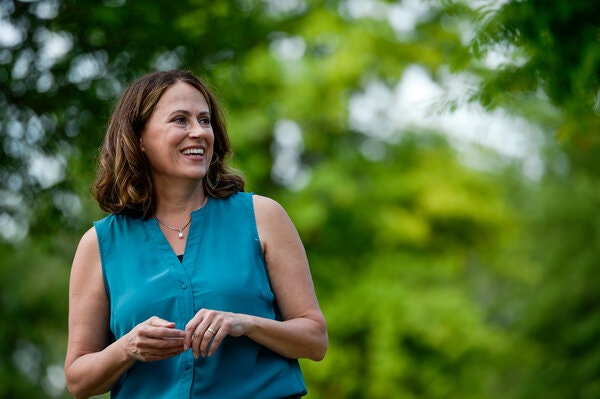 The Senate races in the three states also highlight the same forces that are propelling Mr. Biden’s candidacy. Democrats currently appear to have a good shot of achieving a 50-50 split in the Senate, but in order to win an outright majority they would have to push deeper into Republican-leaning states.

The party may have its best chance of such a pickup in Iowa, where Ms. Greenfield, the Democrat, is capturing 42 percent of the vote to 40 percent for Ms. Ernst, a dangerously low number for an incumbent this late in the race.

In addition to leading among women, Ms. Greenfield is ahead by 10 points among voters older than 65, a group that Ms. Ernst won overwhelmingly when she captured her seat six years ago.

In Georgia, where there are two Senate races on the ballot, Republicans appear better positioned but are still facing highly competitive campaigns. David Perdue is currently winning 41 percent, while his Democratic rival, Jon Ossoff, is taking 38 percent. Sixteen percent of Georgia voters said they were undecided, including a significant number of African-Americans, who historically side overwhelmingly with Democrats.

The state’s other Senate race, to fill the unexpired term of former Senator Johnny Isakson, is even more uncertain. Senator Kelly Loeffler, the Republican appointed to replace Mr. Isakson, is in a multicandidate race with a host of other contenders. If nobody gets 50 percent, the top two vote-getters would advance to a January runoff, which could prove pivotal in a narrowly divided Senate.

Both Ms. Loeffler and Mr. Collins have tied themselves closely to Mr. Trump in the hope of gaining a decisive advantage with conservatives in the first round of voting. But in a runoff, either of them would be confronting a rising population of younger people and Black and Latino voters who reject the president. 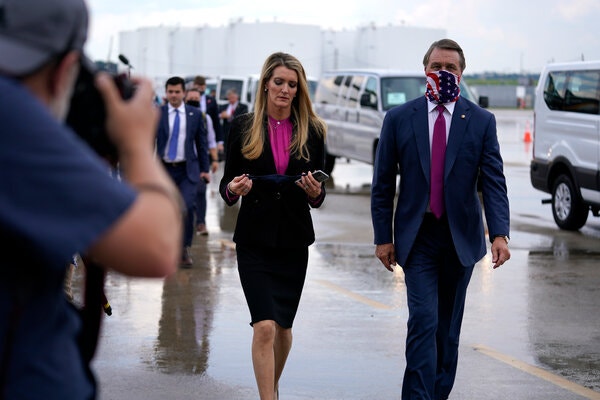 One of those voters is Casey Andre-Lindsay, 41, of Roswell, who said she planned to vote for Mr. Biden. Ms. Andre-Lindsay, who lost her job this year, said she saw Mr. Trump’s agenda as defined by turning back progress. Of Republicans, she said, “It doesn’t seem like they want it to be a democracy where people speak up anymore.”

“It’s going to take a decade to fix the things that he is trying to dismantle,” Ms. Andre-Lindsay said of Mr. Trump.

The Texas Senate race appears to be the best bet for Republicans among the three states. Senator John Cornyn, who’s seeking a fourth term, is winning 42 percent of the vote, while M.J. Hegar, the Democrat, is taking 37 percent.

Still, that a long-serving official such as Mr. Cornyn is not more firmly in control of the race illustrates the increasingly competitive nature of Texas elections and the G.O.P.’s struggles with suburban voters. Mr. Cornyn’s advantage is powered almost entirely by rural voters: he’s trailing significantly among those who live in cities and has just a two-point advantage with suburbanites, 17 percent of whom said they were still undecided.

A significant danger looming for Texas Republicans is that Mr. Trump’s hard-line immigration policies are increasingly out of step with where the state is today, and where it is heading.

Three-quarters of the state’s voters support a pathway to citizenship for yasa dışı immigrants currently living in the country, including 98 percent of Texans under 30. Just 20 percent of Texans over all opposed such a process.

Texans were closely split on Mr. Trump’s proposal for a border wall. But opposition to such a wall is overwhelming among younger voters and significant among independents and those living in the state’s cities and suburbs.

Here are the cross tabs for the poll.

Uzbekistan is upbeat on Afghan trade and development