WASHINGTON — President Trump pressed Senate Republicans on Saturday to confirm his choice to replace Justice Ruth Bader Ginsburg “without delay,” setting up a momentous battle mühlet to inflame the campaign even as party leaders weighed whether they could force a confirmation vote before the election on Nov. 3.

Mr. Trump appears likely to nominate a successor to Justice Ginsburg this coming week after her death on Friday, a selection that if confirmed would shift the Supreme Court to the right for years. But with some Republican senators balking, Senator Mitch McConnell, the majority leader from Kentucky, was canvassing to figure out whether he had enough votes to rush a confirmation in the next six weeks.

“We were put in this position of power and importance to make decisions for the people who so proudly elected us, the most important of which has long been considered to be the selection of United States Supreme Court Justices,” Mr. Trump wrote Saturday morning on Twitter. “We have this obligation, without delay!” He addressed the message to “@GOP” but did not define “without delay” or explicitly demand a Senate decision before voters cast their ballots.

Mr. Trump spoke with Mr. McConnell on Friday night and identified his three top choices as Judges Amy Coney Barrett of the United States Court of Appeals for the Seventh Circuit in Chicago, Barbara Lagoa of the 11th Circuit in Atlanta and Amul R. Thapar of the Sixth Circuit in Cincinnati, according to two people familiar with the discussion. The front-runner appeared to be Judge Barrett, a favorite of anti-abortion conservatives who was a finalist for a previous Supreme Court vacancy when the president reportedly said he was “saving her for Ginsburg.”

Mr. McConnell moved to stave off defections in his conference by sending a letter late Friday night to Republican senators urging them to “keep your powder dry” and not “prematurely lock yourselves into a position you may later regret.” At least two Republicans have made clear that they would not support jamming through a nominee so close to a presidential election, meaning Mr. McConnell, with a 53-to-47 majority and Vice President Mike Pence as a tiebreaker, could afford to lose only one more.

With 45 days until the election, some Republican strategists said that it would make more sense for the president to name a choice now but wait for a Senate vote until a lame-duck session afterward. That way, Republicans who have soured on Mr. Trump because of the coronavirus pandemic that has killed nearly 200,000 Americans or for other reasons would have an incentive to turn out to vote.

Exit polls showed after the 2016 election that 26 percent of Mr. Trump’s voters considered the Supreme Court the most important issue that year, when there was also a vacant court seat, compared with just 18 percent of Hillary Clinton’s supporters. The president has long considered his record of conservative judicial appointments one of his strongest election arguments to motivate his base. 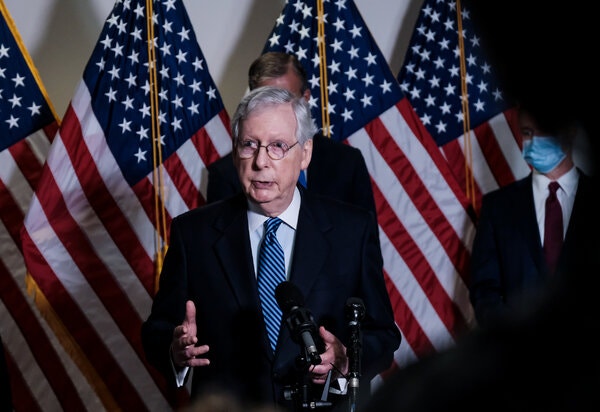 But some Republicans like Senator Ted Cruz of Texas were agitating for a quick vote, arguing that a potentially messy pandemic election with the president already challenging the legitimacy of mail-in voting could wind up at the Supreme Court much as the 2000 election did. A short-handed eight-member court could deadlock at 4 to 4 if Chief Justice John G. Roberts Jr. sided with the three remaining liberals, as he has on a few occasions, whereas another Trump-appointed justice would cement the conservative hold on the bench.

“We cannot have Election Day come and go with a 4-4 court,” Mr. Cruz said Friday night on Fox News. “A 4-4 court that is equally divided cannot decide anything. And I think we risk a constitutional crisis if we do not have a nine-justice Supreme Court, particularly when there is such a risk of a contested election.”

An all-out Supreme Court confirmation fight in the middle of an election or even in a lame-duck session would fit in with a year of seismic events that have rocked the United States. The year started with only the third presidential impeachment trial in history, followed by a once-in-a-century pandemic, the most devastating economic collapse since the Great Depression and an eruption of racial strife that brought protesters into the streets and at times resulted in violent clashes.

Justice Ginsburg’s death at 87 produced a great outpouring of grief and anxiety among her many admirers, with hundreds of people gathered spontaneously late into the night at the Supreme Court building. As a lifelong champion of women’s rights and only the second woman to serve on the court, she became an unlikely icon for the left late in life, called the Notorious R.B.G. for her powerful dissents and unyielding defense of equal rights.

She had survived cancer and other ailments for years, and was determined to hang on until after the election, only to fall short. Just before her death, she dictated a statement to her granddaughter: “My most fervent wish is that I will not be replaced until a new president is installed.”

No vacancy at the Supreme Court occurring so close to a presidential election in American history has been filled by Senate vote before the election. The closest came in 1916 when Chief Justice Charles Evans Hughes resigned 150 days before the election to run as the Republican candidate, and his successor was confirmed before the balloting.

When a retirement opened up a seat right before the 1956 election, President Dwight D. Eisenhower filled it with a recess appointment, reaching across the aisle to install a Democrat, William J. Brennan. After winning a second term, Eisenhower formally nominated Justice Brennan for the lifetime position. The recess appointment was not controversial at the time, and Justice Brennan was eventually confirmed with almost no opposition.

For today’s partisans, the more memorable precedent was Justice Antonin Scalia’s death in February 2016, which came 269 days before the election. Mr. McConnell blocked President Barack Obama from filling the seat with his nominee, Judge Merrick B. Garland, arguing that it was too close to the election. 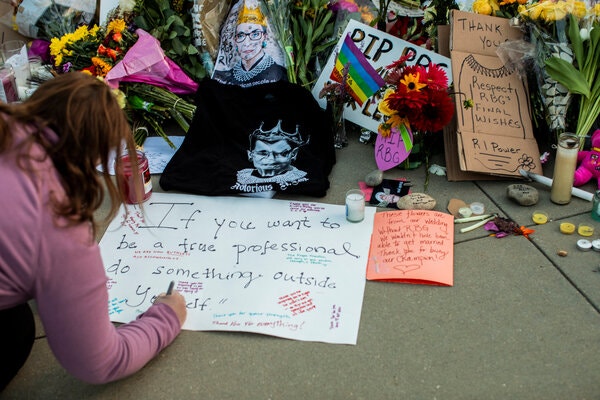 “The American people should have a voice in the selection of their next Supreme Court justice,” Mr. McConnell said in a statement released after Justice Scalia’s death. “Therefore, this vacancy should not be filled until we have a new president.”

Mr. McConnell later amended his rationale, saying it was not just proximity to the election that justified blocking a nominee but the fact that the president and the Senate majority at the time were held by opposite parties. Still, after Justice Ginsburg’s death on Friday, Democrats led by former Vice President Joseph R. Biden Jr., their presidential nominee, demanded that Republicans respect the precedent they set of not acting so close to a presidential election — in this case much closer — and threw Mr. McConnell’s words back at him.

Senate Democrats held a conference call on Saturday to plot strategy and Senator Chuck Schumer of New York, the party leader, vowed retaliation if the Republicans forced through a confirmation. “Let me be clear,” he told his fellow senators, according to a person on the call. “If Leader McConnell and Senate Republicans move forward with this, then nothing is off the table for next year. Nothing is off the table.”

Some Democrats have argued that if they take control of the Senate, they should consider eliminating the filibuster used by the minority party to block legislation and potentially even add seats to the Supreme Court to offset what they consider Mr. Trump’s illegitimate appointments. The number of seats on the Supreme Court is set by law, not the Constitution, and has shifted over the years, but the last time a president tried packing the court by expanding it, Franklin D. Roosevelt suffered one of his biggest legislative defeats.

“We cannot let them win this fight,” Senator Kamala Harris of California, the party’s vice-presidential nominee, wrote in an email. “Millions of Americans are counting on us to stand up, right now, and fight like hell to protect the Supreme Court — not just for today, but for generations to come.”

Mr. Trump’s campaign likewise moved to seize advantage on the issue, issuing a statement challenging Mr. Biden: “Where’s your Supreme Court list?” Much as he did in 2016, Mr. Trump this month released a list of more than 40 potential candidates he would consider if a Supreme Court vacancy occurred. Mr. Biden has not released such a list in keeping with longstanding tradition before Mr. Trump arrived on the scene.

As they assessed the myriad political implications, Republican strategists said they believed that the Supreme Court showdown could be beneficial in their fight to hold the Senate majority since the decisive races are being waged in states that Mr. Trump is likely to carry — Iowa, Georgia and Montana among them.

But it could seal the fate of the party’s most endangered incumbent, Senator Susan Collins of Maine, and present challenges for others facing tough races, like Senators Cory Gardner of Colorado, Martha McSally of Arizona, Kelly Loeffler of Georgia, Thom Tillis of North Carolina and Lindsey Graham of South Carolina.

Ms. Collins this month said she would not favor moving ahead with confirmation of a justice in October, and Senator Lisa Murkowski, Republican of Alaska, concurred in an interview on Friday shortly before news of Justice Ginsburg’s death.

But Mr. Graham, who said in 2018 that “we’ll wait to the next election” if an opening occurred in the last year of Mr. Trump’s term, flipped on Saturday, posting an interview he gave in July when he said that “Merrick Garland was a different situation” because the presidency and Senate were controlled by different parties.

Ms. Loeffler posted a statement on Twitter saying that Mr. Trump “has every right to pick a new justice before the election” but did not say whether the Senate should vote by then. In her own tweet, Ms. McSally said, “This U.S. Senate should vote on President Trump’s next nominee for the U.S. Supreme Court,” but did not commit to timing. Likewise, Mr. Tillis said that he “will support” whoever Mr. Trump nominates without saying when a vote should happen.

If the Senate did wait to vote until after the election, the outcome would presumably vary greatly depending on the outcome. If Mr. Trump wins and Republicans keep control of the Senate, he would be in strong position to simply confirm his nominee. But if the president loses to Mr. Biden or Democrats capture the Senate, the situation would become vastly more volatile.

A lame-duck president could still try to force through his pick in the 10 weeks before Mr. Biden were to be inaugurated, but such a move would provoke a storm of protest, and the same Republican senators wary of voting before an election would most likely be leery about letting a defeated president fill the seat.

Further complicating the scenario would be a victory by Mark Kelly, the Democratic candidate in Arizona, over Ms. McSally, who was appointed to fill an unexpired term. Mr. Kelly would be sworn in probably by late November, meaning Mr. McConnell would have only 52 Republican senators at that point.