President Trump’s mismanagement of the coronavirus pandemic has imperiled both his own re-election and his party’s majority in the Senate, and Republican lawmakers in crucial states like Arizona, North Carolina and Maine have fallen behind their Democratic challengers amid broad disapproval of the president, according to a poll conducted by The New York Times and Siena College.

Former Vice President Joseph R. Biden Jr. led Mr. Trump by wide margins in Arizona, where he was ahead by nine percentage points, and Maine, where he led by 17 points. The race was effectively tied in North Carolina, with Mr. Biden ahead by one point, 45 percent to 44 percent.

In all three states, Democratic Senate candidates were leading Republican incumbents by five percentage points or more. Senator Susan Collins of Maine, a Republican seeking a fifth term, is in a difficult battle against Sara Gideon, trailing by five points as voters there delivered a damning verdict on Mr. Trump’s stewardship: By a 25-point margin, 60 percent to 35 percent, they said they trusted Mr. Biden over Mr. Trump on the issue of the pandemic.

The poll, conducted among likely voters, suggests that the most endangered Republican lawmakers have not managed to convince many voters to view them in more favorable terms than the leader of their party, who remains in political peril with less than 50 days remaining in the campaign. Democrats appear well positioned to gain several Senate seats, and most voters say they would prefer to see the White House and Senate controlled by the same party. But it is not yet clear that Democrats are on track to gain a clear majority, and their hopes outside the races tested in the poll largely depend on winning in states Mr. Trump is likely to carry.

In the swing states, Mr. Trump is still lagging across the board. The Times has polled seven presidential battlegrounds in the last two weeks, and the president has not led in any of them, and in no state did he amass more than 44 percent of the vote. Though he has repeatedly tried to shift the focus away from the virus, he has not established a meaningful advantage over Mr. Biden on any issue of equal urgency: Voters see Mr. Trump as somewhat more credible on issues of the economy and public order than on the pandemic, but not to the point of offsetting their overall disapproval of him.

While Maine exhibited the widest gap over the handling of the virus, voters in North Carolina, the closest presidential swing state polled so far by The Times, also preferred Mr. Biden, by 52 percent to 41 percent. In Arizona, the difference was even more lopsided, with voters favoring Mr. Biden by 16 percentage points. 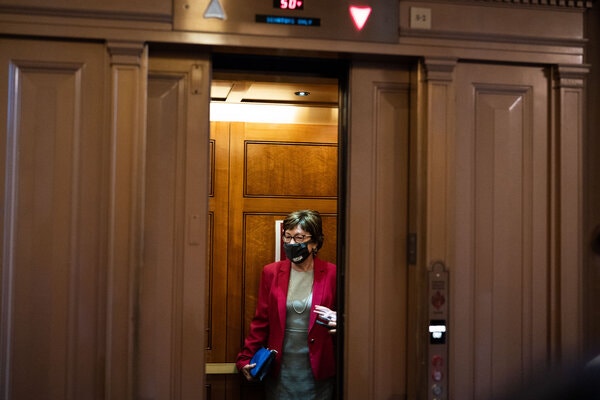 The underlying dynamics of the race appeared to be stable and consistent with national trends, with Mr. Biden leading among women, voters of color and educated whites, and Mr. Trump’s strongest support coming from men and white voters who did not attend college. There were a few variations among the states, however: In North Carolina, the poll found no substantial gender gap, while in Arizona Mr. Biden was even with Mr. Trump among men and in Maine he had a slight advantage over the president with less-educated whites.

The Democrats’ strong lead in Arizona, a historically Republican state, is owed to a 30-point advantage among Hispanic voters and a break-even performance with whites. And both Mr. Biden and the Democratic Senate candidate, Mark Kelly, are leading with voters over 65, a crucial group in a state rich with retirees. Mr. Kelly was leading Senator Martha McSally among all voters, 50 percent to 42 percent.

Joseph Seoane, 67, of Glendale, Ariz., is among the seniors in the state who plan to vote for Mr. Biden. A political independent who supported Mr. Trump in 2016, Mr. Seoane said he was still “not against” the president but believed it had become clear that Mr. Trump “can’t handle” the job.

Mr. Seoane said he had become particularly unsettled by Mr. Trump’s handling of the coronavirus. He said he understood the president’s impulse to “play down” the disease, but he was concerned that the government was ignoring science.

“There are certain things we can’t play down,” he said. “And now we have all these victims.” 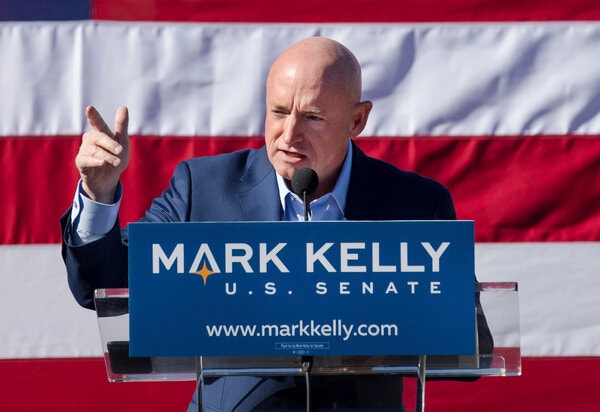 Still, the battle for control of the Senate remains close. Democrats must net at least three seats in order to achieve a 50-50 split in the Senate, which would be enough to take control if Mr. Biden were elected president and his running mate, Senator Kamala Harris, could cast tiebreaking votes as vice president.

Democrats are likely to lose one seat they currently hold in Alabama, where Senator Doug Jones is a long shot for re-election, meaning they probably have to capture four seats currently held by Republicans to reach parity.

The poll indicates that Democrats are within reach of that goal. In addition to the three states polled, Democrats are favored to win a Republican-held seat in Colorado, where Mr. Biden is expected to win easily. While some voters say they intend to split their ballots, supporting a presidential candidate of one party and a Senate nominee from another, they only make up a small share of the electorate.

For the same reason, however, it is not clear how deep into the Senate map Democrats will be able to extend their gains. Many of the Republican senators up for election represent states Mr. Trump won handily in 2016, including places like Iowa, South Carolina and Kansas, where Democrats are competing aggressively.

Potentially unsettling for Republicans was the enthusiasm voters expressed for having the same party control the White House and the Senate. Political strategists have long discussed the possibility that if Mr. Trump were to fall irretrievably behind Mr. Biden, Republicans could make the case to voters for electing a G.O.P. Senate as a check on the Democrats’ agenda.

But in all three states, two-thirds of voters or more said it would be better for the country if the White House and Senate were controlled by the same party, including a majority of independent voters.

The states were more divided over which party they would prefer to have in control of the Senate. In Maine and Arizona, half or more of the electorate said they would prefer a Democratic Senate. In North Carolina, voters by a four-point margin preferred a Republican Senate even though a plurality are currently supporting Cal Cunningham, the Democratic nominee, over Senator Thom Tillis.

Mr. Trump’s competitiveness in North Carolina is a comparatively bright spot for him in the Times polling. But Mr. Tillis appears to be in a particularly weak position, drawing only 37 percent of the vote and running markedly behind Mr. Trump. A large number of voters say they are still undecided, including 11 percent of Black voters, potentially giving Mr. Cunningham room to improve his position if he can consolidate support from Democratic-leaning groups.

Dean Honeycutt, 59, of Oakboro, N.C., said she was enthusiastically supporting Mr. Trump but had not yet decided whom to back for Senate. She said she admired Mr. Cunningham’s background as a military veteran, but was leaning toward Mr. Tillis because she did not want to give Democrats a majority in Congress. 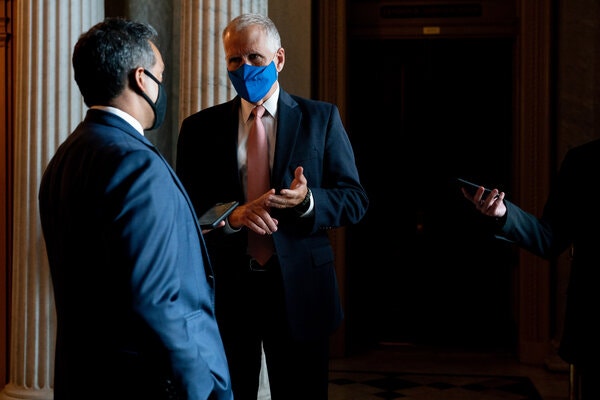 The limitations of crossover voting were most on display in Maine, where Ms. Collins is running well ahead of Mr. Trump and collecting significantly more support from independent voters and women. The poll found Ms. Collins drawing support from 42 percent of those voters, while Mr. Trump struggled to win just a third of either group.

Yet Ms. Collins was still five points behind Ms. Gideon, her Democratic challenger. A large share of voters appear determined to punish Ms. Collins for her affiliation with Mr. Trump: Fifty-five percent of voters said they disapproved both of her vote against impeaching Mr. Trump and her vote to approve Justice Brett M. Kavanaugh’s nomination for the Supreme Court.

Half of Maine voters said they approved of Ms. Collins’s vote against repealing the Affordable Deva Act, including three in five Democrats and a majority of women. But that gratitude was not translating into enough votes to overcome the Democrats’ overall advantage in the state.

Ginger Cazan, 69, of Swanville, is the kind of Maine voter whom Ms. Collins might evvel have been able to draw into her column. A self-described moderate Democrat, she said that she personally “would never have an abortion,” but that she was dismayed by Ms. Collins’s vote for Justice Kavanaugh because she believed he would “change the law and take women’s rights away.”

Ms. Cazan said she planned to vote for Mr. Biden and called Mr. Trump a “dictator in waiting” — which reminded her of another reason she opposed her Republican senator: Ms. Collins, she recalled, “did not impeach Trump when she had the chance.”

Mr. Trump’s disadvantage in Maine was so severe that it was not clear he would even carry the state’s Republican-leaning Second Congressional District. The state splits its Electoral College votes by district, and four years ago Mr. Trump picked up a single elector from the more conservative of Maine’s two seats. But the poll showed Mr. Biden with a nominal lead of two percentage points in that district.

Mr. Trump was not without relative strengths. In North Carolina, most voters saw him as better suited than Mr. Biden to manage the economy, and by slim margins preferred him on matters of national security and public order. Mr. Trump enjoyed a two-point advantage on the economy in Arizona and was even with Mr. Biden on national security, even as he trailed his challenger over all. But Mr. Biden led on law and order in Arizona, and on every issue tested in Maine.

There was no evidence that the president had managed to shift the overall shape of the race in his direction, despite weeks of efforts to redirect voters’ attention to the protests and occasional violence in the Midwest and, more recently, his demand that Mr. Biden unveil a list of people he would consider appointing to the Supreme Court.

That last issue does not look like a winning one for Mr. Trump. On the question of which candidate would do a better job of choosing Supreme Court justices, voters in all three states favored Mr. Biden, by varying margins.

Here are the crosstabs for the poll.

Vienna set to host 'this year's only international climate conference'