In parts of the Upper Midwest, the phrase “pizza farm” is as evocative of summer food as “juneberry pie,” “butter cow” and “rutabaga şenlik.” (The 88th annual celebration begins Saturday in Cumberland, Wis.)

Trace the route of the Mississippi River down from Minneapolis and along the Wisconsin-Iowa border. In the last two decades, dozens of farms in this region have built wood-fired ovens, studied the basics of crust, sauce and cheese, and begun serving pizza on summer nights.

Families haul in stacks of camp chairs; couples on dates sip wine on picnic blankets; children poke at the animals and run themselves out by dark. Pizza is usually the only item on the menu, but the homegrown toppings change with the season, from baby onions and roasted carrots in the spring to zucchini, fried eggplant and red peppers as the season closes out in September. In tune with the farm-to-table, local and sustainable food movements, pizza farming has spread across the country. 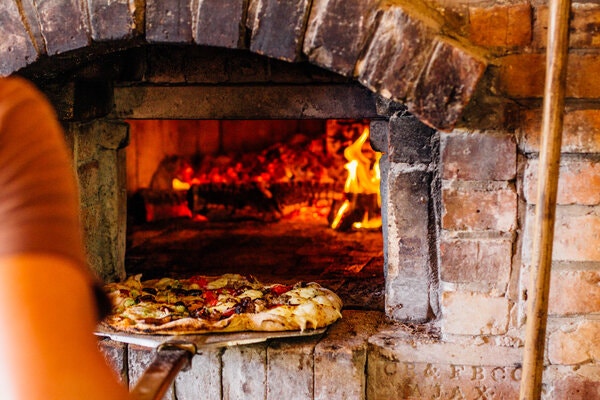 Ted Fisher and Robbi Bannen of the A to Z farm in Stockholm, Wis., started serving pizza in 1998, and many other farmers credit them as local pioneers. They kept it up every summer because, they say, it has supported them in so many ways: using up gluts of summer produce, giving their three children skills and spending money, and drawing locals onto the farm. Those customers became regulars — and, often, C.S.A. members, the lifeblood of the farm.

“That’s why this is like a death in the family,” Ms. Bannen said of their decision to cancel pizza nights this summer because of the coronavirus pandemic.

But some pizza farms are having a blockbuster season: Like drive-in movie theaters, they happen to be perfectly suited to outdoor operations and social distancing. Across the country, new pizza farms have sprung up this summer, as farmers scramble to make up for lost sales to restaurants and other big customers.

“The landscape has completely changed,” said Liz Neumark, who just opened up her Katchkie Farm in Kinderhook, N.Y., to a weekend collaboration with Hilltown Hot Pies, a local specialist. “I never knew there were pizza groupies.”

Farm-to-table pizza has been around since the food revolution of the 1970s, but usually closer to the table than to the farm. By the time the Los Angeles chef Wolfgang Puck made his reputation by turning pizza into high-end restaurant food in the 1980s, Chez Panisse, in Berkeley, Calif., was already famous for its wood-fired pies, topped with foraged greens like nettles and wild herbs. 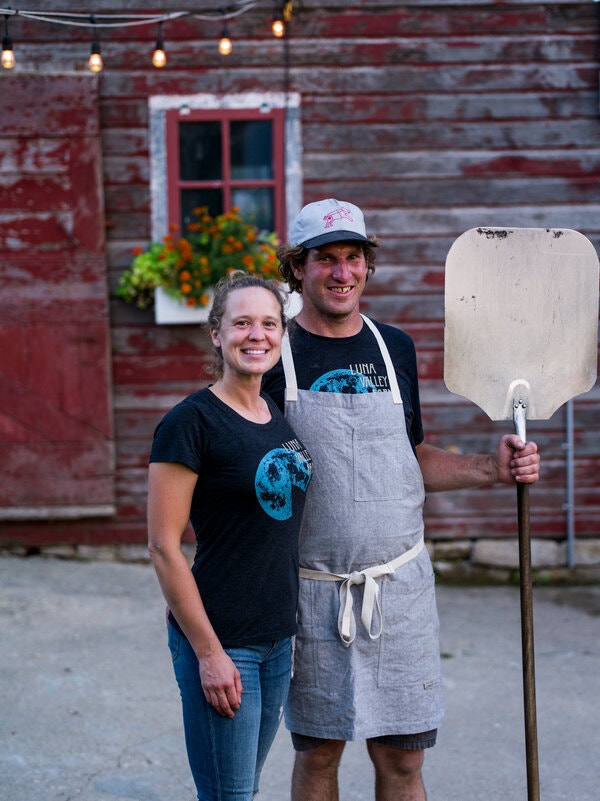 Particularly determined pizza farmers even raise cattle for cheese and pigs for meat. The popular Iowa Margherita pie at Luna Valley Farm, in Decorah, Iowa, has Italian sausage crumbled over the basic formula of fresh tomatoes, mozzarella and basil leaves. The only thing Tom and Maren Beard don’t make themselves is drinks.

“We have three breweries in a 10-mile radius, local soda and natural wine,” Ms. Beard said, and partnerships with local businesses have also become part of the pizza farm ethos. (Liquor laws in these states often allow farms to serve beer and wine.)

Many pizza farmers also see themselves as activists and teachers. Educational sites like Katchkie Farm, the Edible Schoolyard in Berkeley, Calif., and the Yale Farm in New Haven, Conn., have long used pizza ovens to introduce students to the principles (and pleasures) of diverse, local and sustainable agriculture. For these farmers, pizza is an ülkü teaching tool: Even a small farm can raise wheat for dough, tomatoes and herbs for sauce, and an array of vegetables for toppings.

“We didn’t start making pizza as a concept; we were just trying to find something that worked for us.” Ms. Bannen said. “I’m waiting for someone to open a taco farm.” 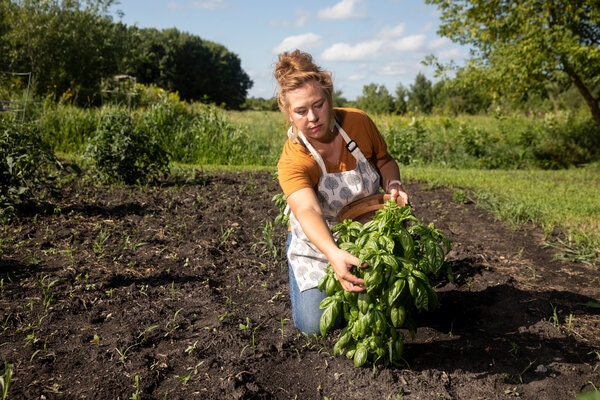 When Emily Knudsen took her new boyfriend, Bill Bartz, to his first pizza night at a nearby farm, he had a “Sound of Music” moment. “He was like Julie Andrews twirling around on that mountain,” she said, ready to jump feet-first into her longtime dream.

Unlike many pizza farmers, neither of them had worked on a farm — Ms. Knudsen, 37, has a background in hospitality and wedding planning, and Mr. Bartz, also 37, in construction — but they threw themselves into it, starting from scratch in 2014. Although they grow some ingredients (basil, tomatoes, peppers and honey), their specialty is lavish toppings, loaded onto pies like the Buster (two kinds of mozzarella, sausage, caramelized onions, mushrooms, basil), the Sweet Georgia (mozzarella, prosciutto, arugula, goat cheese, honey) and the Pig and Pork (tomato sauce, mozzarella, sausage, pepperoni and green olives). 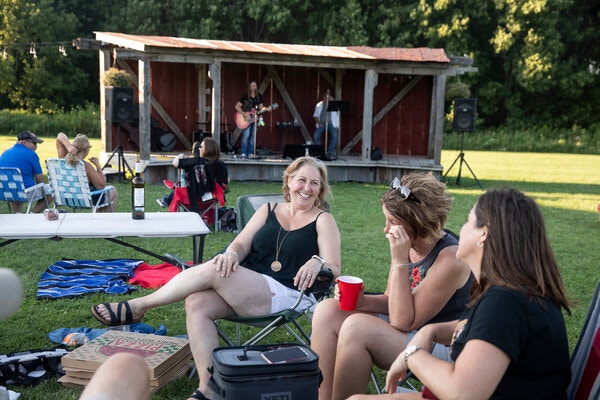 Like many çağdaş farmers, they have branched out from agriculture in multiple directions, hosting corporate picnics and wedding rehearsal dinners, and adding attractions like baby animals, live music and local crafts to pull in a wider audience. (Waseca is a little more than an hour’s drive south of the Twin Cities). By staying open this summer, the farm has had its busiest pizza season ever, while enforcing a new reservations-only policy and strict social distancing rules. “I’m a hammer,” Ms. Knudsen said with pride. “You should see me with those brides and their mothers.” 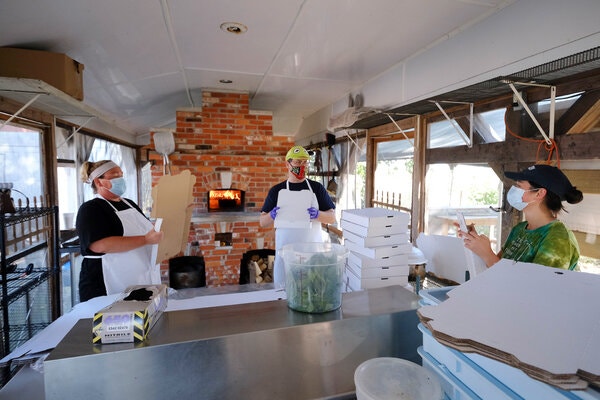 This farm in Wabash County has been in the Hawkins family for four generations. But Jeff Hawkins, 65, said he became a farmer only when he resigned as pastor of a Lutheran Evangelical parish to devote himself to agriculture. “Just like farming had become industrial,” he said, churches had become concerned with cost-effectiveness and productivity. “Pastors were becoming more like C.E.O.s and less like shepherds.” 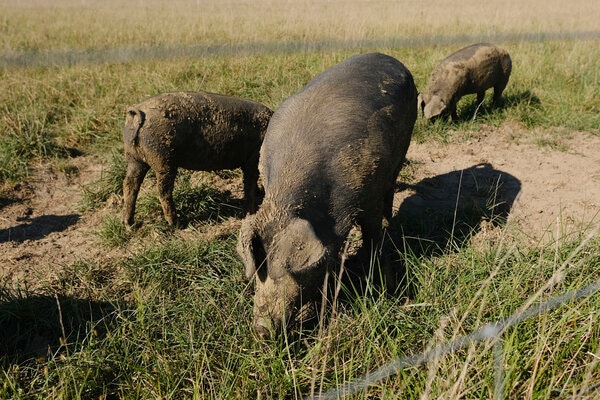 With his son, Zach, 38, Mr. Hawkins began diversifying the farm, where they now produce vegetables, honey, grains, pigs, chickens, goats, cattle and — on Friday nights — pizza. They committed to making the farm a sustainable business that also funds a nonprofit dedicated to reconnecting members of the clergy with agriculture, which Mr. Hawkins believes promotes healthy and holistic leadership. “I was called to this farm,” he said. 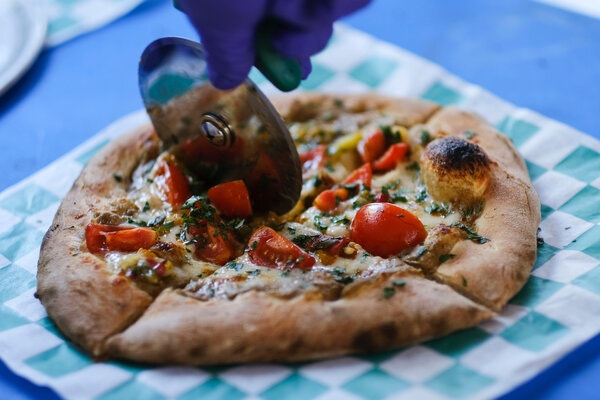 Zach had also left the farm to attend college in Iowa, where he dove into sustainable farming and dabbled in sourdough; on his return, he was handed responsibility for the family’s pizza recipe and style. “I’m always pushing the char,” he said: blistered, blackened, puffy edges are prized signs of a well-cooked wood-fired pizza.

They bring the same holistic approach to partnerships with the community: A local bakery makes the dough, and a young farmer trying to keep his family’s nearby dairy farm going makes the mozzarella. Chefs from restaurants in Fort Wayne, 40 miles to the east, are invited to visit and experiment, using anything that grows on the farm as a pizza topping. Kimchi and carrot-top pesto were recent hits. 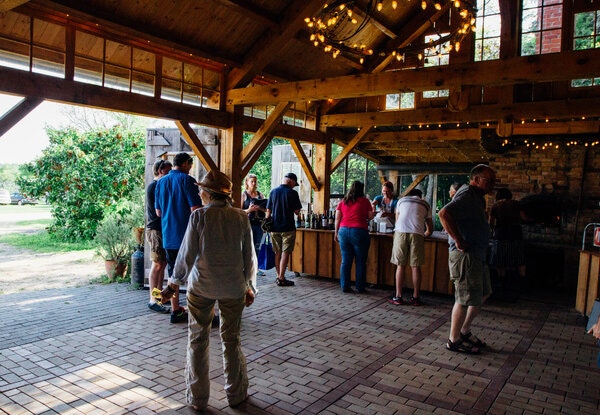 A to Z Produce and Bakery

Ted Fisher and Robbi Bannen are not only credited as pioneers of the pizza farm; they also believe they coined the term soon after they began in 1998, quoting a 5-year-old visitor, Ms. Bannen said.

“We were food people way back when,” in the 1970s, Mr. Fisher said. (He is now 62, Ms. Bannen is 61.) A skilled bread baker, he already knew how to work with naturally leavened doughs, and adapted those skills to pizza with help from Alice Waters’s classic 1980 cookbook, “Chez Panisse Pizza, Pasta and Calzones.” When they put the word out that they would be selling pizza for takeout one night a week, “to most people it looked like an insane thing to do,” she said. At the time, most farms did not serve hot food, any more than restaurants grew produce — though now both practices are common.

They grow all the vegetables for tomato sauce and toppings, and wheat for the flour. “There’s nothing better than being able to use up the food that we grow,” Ms. Bannen said. Rather than guess how many peppers they’ll need in a given year, or whether anyone will buy a new kind of kale they want to try growing, they can take chances, knowing that everything can end up on a pizza.

One night, a takeout customer asked to set up a folding table in the yard. After that, everyone was invited to sprawl out under the stars. (A to Z has been closed this summer, however, because of the virus.) Now the farm has fed a generation: Visitors have had first dates, proposed marriage and fed their babies at A to Z pizza nights.

“A lot of people around here no longer have family farms that they remember,” she said. “After 22 years, that’s what we are — everyone’s family farm.” 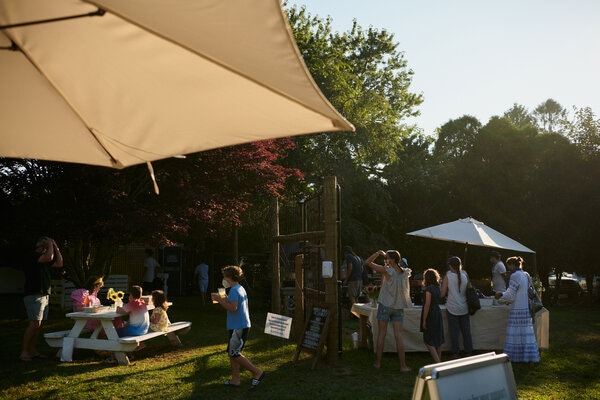 To most pizza farmers (and pizza lovers), the basic components of pizza are the crust, the sauce, and the cheese. For Amanda Merrow and Katie Baldwin, there is a crucial fourth: the flour.

Their farm, Amber Waves, is part of a growing movement to return the cultivation of grain — like wheat, oats, sorghum, barley — to small regional farms, instead of relying on industrial giants in the Great Plains. Local grain, they say, has the same benefits as local fruits and vegetables, contributing to flavor, sustainability, and community. 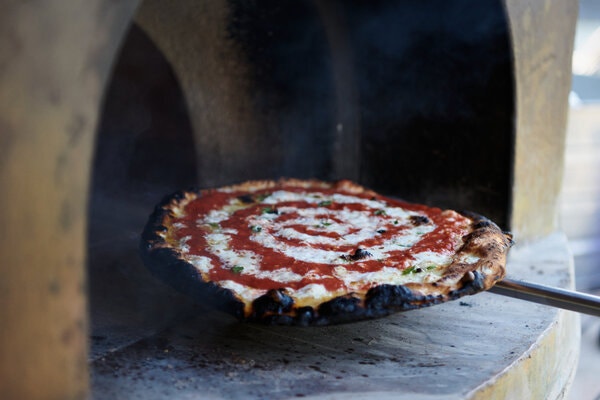 The sourdough starter for their pizza crust was donated by a previous owner of the farm who had reportedly kept it going since 1968, and they have collaborated with Carissa’s, a nearby bakery famous for creative breads like pickled rye and slow-risen baguettes. “The taste of flour made from freshly harvested grain is a totally different thing,” said Ms. Merrow, 35. “And bakers around here are able to appreciate that.”

When they opened Amber Waves in 2008, one of their first investments was a mobile pizza oven. They introduced themselves to the community with D.I.Y. family pizza nights: Children grab a dough ball, learn to roll it out, then wander into the garden to pick the toppings.

“Even kids who don’t eat vegetables will eat pizza,” said Ms. Baldwin, 39. “Once a cherry tomato is on a pizza, it’s not a vegetable anymore — it’s a topping.” 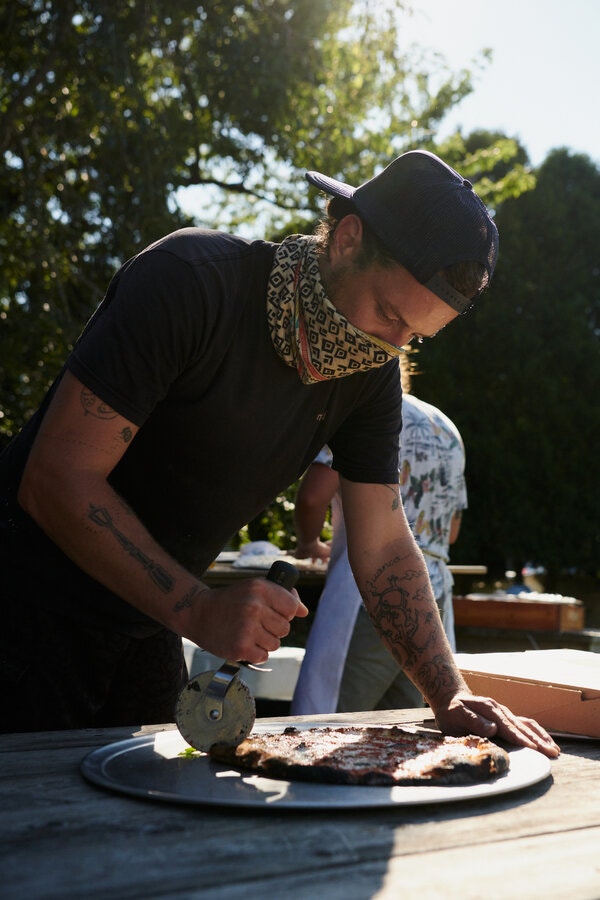 Amber Waves is moving in the opposite direction of development in its ultrawealthy part of the Hamptons, using land for cultivation instead of installing swimming pools. But much of the area was farmland until relatively recently; potatoes, corn, wheat and more have thrived in this soil for hundreds of years.

“We’re not bringing this in,” Ms. Merrow said. “We’re bringing it back.” 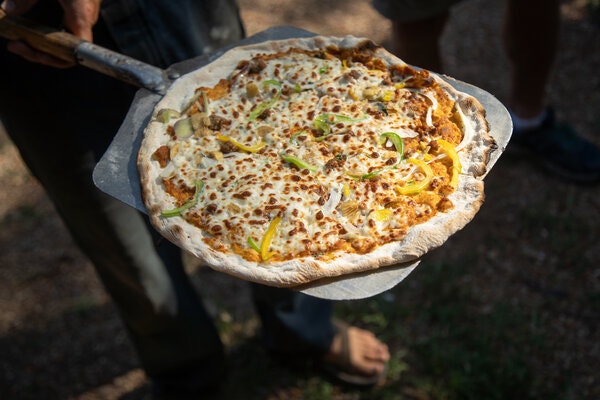 Curtis Millsap first heard about pizza farms soon after he and his wife started farming in 2007, from Wwoofers arriving from Wisconsin. Those volunteer workers from Worldwide Opportunities on Organic Farms hop from farm to farm as needed, often carrying new ideas and innovations with them. 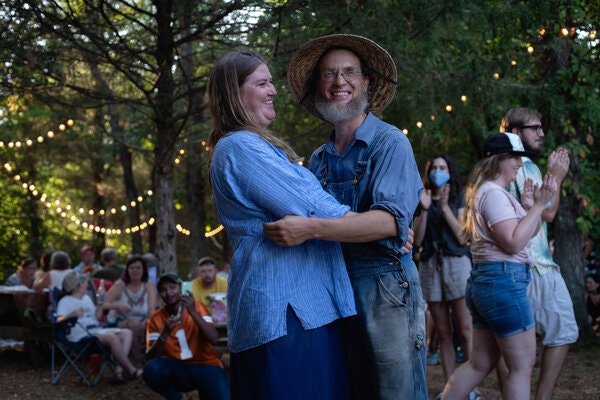 “It sounded like this magical thing,” with fairy lights in the trees, live music and wood-fired pizza under the stars, said Mr. Millsap, 44. He and his wife, Sarah, 42, have raised 10 children on the farm, four miles north of central Springfield. As the family has grown, their goals have shifted from raising more vegetables to building more relationships. They brought on a local mason to make them a mud oven — the original high-heat baking technology — and enlisted their extended family to help.

“If we were going to have the kind of community we wanted,” Mr. Millsap said, “we would have to build it right here on the farm.”

Today, they host volunteers from all over the world, ask C.S.A. members to work alongside them during planting and harvest, and entice locals to the farm with all-you-can-eat pizza on Thursday nights from May to October. The conversation about the week’s offerings begins around the kitchen table on Monday mornings, with the question: What do we have a lot of this week? 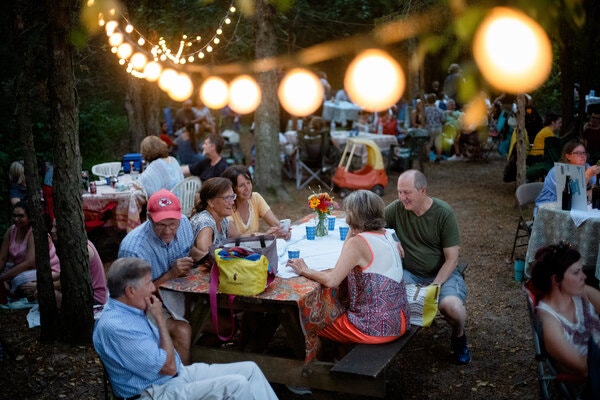 Their most popular pie in the spring is topped with roasted beets, feta cheese and walnuts. High summer brings bacon, arugula and tomato, with a schmear of garlic mayonnaise.