BRUSH CREEK, Calif. — Of the hundreds of homes rendered to ash by a ferocious wildfire this month in the mountains on the northeastern edge of California, one had particular historical significance. Mountain House, a former stagecoach hotel with its saloon-style second-story balcony and steep roof, was a relic of the gold rush, a stop on the way to the mining towns that dot the thickly forested slopes and canyons of the Sierra Nevada.

The gold rush, the seminal period that helped transform a thinly populated territory into the magnet of talent and adventure-seekers that California would become, sent hundreds of thousands of people into the hills — “wanderers from the whole broad earth,” in the words of one 19th-century observer.

But the state’s wildfires, which are still burning, are challenging the survival of some of these towns, among the oldest and most storied of the frontier settlements in California. A fabled American way of life, the tight-knit mountain towns of the West, feels increasingly precarious in the era of climate change and the fast-moving and often unstoppable fires that come with it.

In the Sierra they are accustomed to danger, everything from wildfires to rockslides and avalanches. But this year’s fires have been menacing even for the most hardened among them. Those who did not lose their homes live on a hair trigger, choked for weeks by thick smoke and always girded for a quick escape.

“We’re just hanging on,” said Danielle Massy, a cook and mother of two from Portola, a city of about 2,000 people that served as a trading post during the gold rush. “Stuff is pretty wild right now.”

Down the road from Mountain House, in the thickly forested community of Berry Creek, Reed Rankin, the fire captain, drives from one burned homestead to the next, surveying the wreckage and calling his friends and neighbors to report his grim findings.

Both grocery stores. Flattened. The elementary and middle school. A total loss. The fire station. No roof, no walls. In many neighborhoods the treetops are still green but the homes beneath are razed, as if a conquering army had passed through Berry Creek and torched everything at eye level.

Mr. Rankin, who lost his home, which was not insured, and all of the tools of his well-drilling business, is vowing to stay and rebuild.

“We live here for a reason,” he said as a colleague dug a grave in the ash-covered soil for a cat killed in the fire at a neighbor’s incinerated home. “We like to be out away from everyone.” 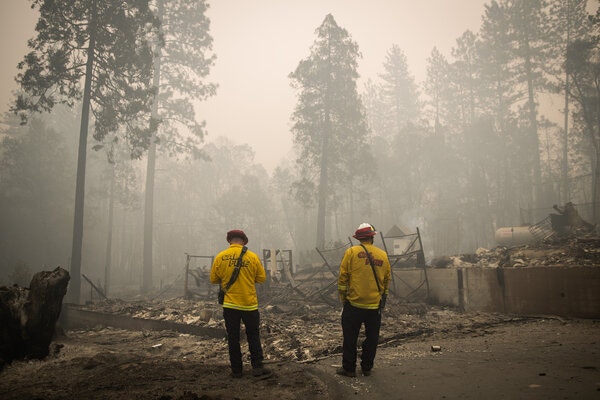 The intensely hot and fast-moving wildfires of the past four years have razed communities of all sorts in the West, including semi-urban neighborhoods next to freeways. But the forested and isolated communities of the Sierra are particularly susceptible to catastrophe.

When wildfires race through the hills, roads shrouded in vegetation become tunnels of fire. Too often there is only one way out. Two years ago, more than 80 people were killed and 18,000 homes were destroyed in the foothills of the Sierra in and around the town of Paradise, an hour’s drive from Berry Creek.

Rick Crowder, who quit his job as a UPS truck driver and became a yodeling country singer who has performed at Carnegie Hall, has two homes on the edge of the Sierra, one of them in Paradise. Both properties have been scorched by wildfires but somehow not destroyed, as some of his neighbors’ homes were.

By the door of his Paradise home, Mr. Crowder, whose stage name is Sourdough Slim, keeps his most precious belongings ready to go — five guitars, four accordions, ukuleles and banjos, boxes of pleated wool and gabardine trousers, 10-gallon hats and cowboy boots.

“Everything I would need to perform,” he said.

Mr. Crowder grew up in the forests of the Sierra; his grandfather, who mined gold on the Honcut Creek, would put out wildfires with the help of a bulldozer.

California has always had wildfires but these are more intense, Mr. Crowder said.

“My own opinion would be that climate change certainly makes a difference — without a doubt,” he said.

In between his regular yodeling practices, Mr. Crowder trims back trees and shrubs, keeping them away from his home. The fires have changed the way he thinks about his properties.

“You just have to take the attitude, ‘OK, this could all go tomorrow,’” he said.

From the earliest days of the gold rush, settlers were willing to put up with the risks of the Sierra for the rewards they reaped, whether it was gold or simply living amid the sheer beauty of the place. 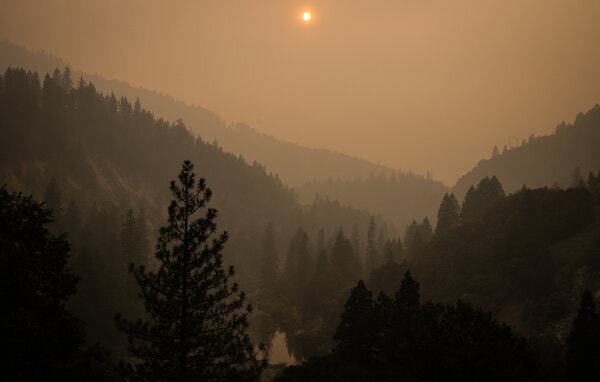 The letters of Louise Clappe to her sister on the East Coast in the early 1850s sealed in the American imagination both a vision of California’s alpine splendors and some of the harsh realities of the mining camps.

Ms. Clappe, whose missives were published under the name Dame Shirley, rode into the Sierra along the stagecoach line that passed through Berry Creek and past Mountain House.

“I wish I could give you some faint idea of the majestic solitudes through which we passed,” she wrote her sister, in letters published in The Pioneer, a San Francisco magazine, and republished in book form in multiple printings. “Deep in the shadowy nooks of the far-down valleys, like wasted jewels dropped from the radiant sky above, lay half a dozen blue-bosomed lagoons, glittering and gleaming and sparkling in the sunlight.”

The Sierra were dangerous then, too. She does not mention fires in her account but there were bandits, cougars and bears, as well as violent fights among miners and between Native Americans and white settlers whose land they were traversing.

Ms. Clappe, whose husband worked as a doctor in a gold mining camp, said she came to love her “wild and barbarous life.”

“The day was beautiful,” she wrote in one letter to her sister, “but when is it ever otherwise in the mountains of California?”

The same impulses still draw people to the Sierra today.

Three years ago, Jessie Mazar moved from Vermont to Quincy, a gold rush town in a valley just east of where the North Complex Fire is burning.

The hiking and backcountry skiing, the sense of community, the do-it-yourself spirit — Ms. Mazar came for it all.

But the fires have weighed on her. In late August, Quincy had some of the worst air quality on the West Coast, an index reading well above 300, which is considered hazardous. Since then it has been five weeks of nearly constant smoke and the fear that the fire will come over the mountain. 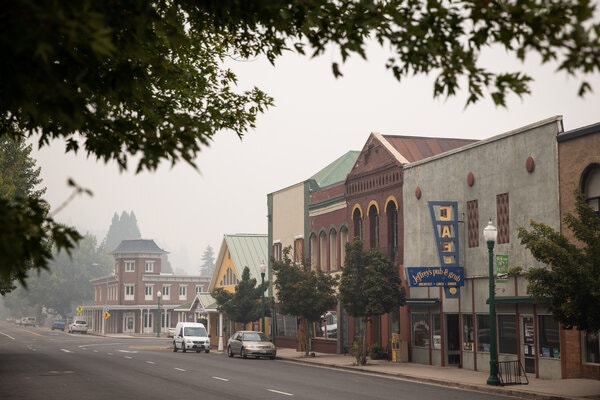 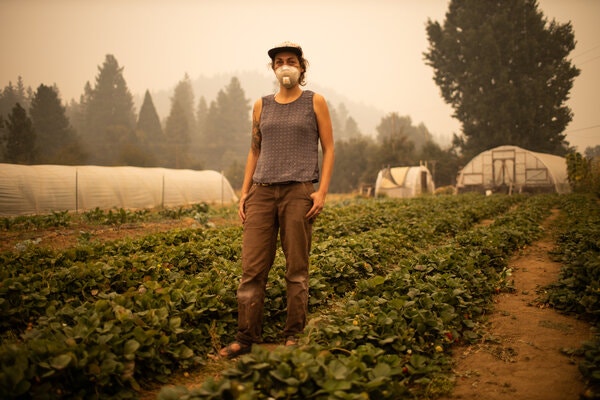 Her car is permanently packed with the things she wants to keep: her passport, checks, some cash, recent tax documents, a journal and sketchbook, her laptop.

“All my family is on the East Coast and they think it’s crazy that I’m here,” Ms. Mazar said.

She and her partner intended to buy a house in Quincy, where a home goes for $200,000, less than half the California average. Now they are not so müddet.

“Wildfires definitely throw a question mark in my mind of whether we can stay here,” Ms. Mazar said. “We have pumped the brakes on buying a property. It’s really scary.”

Yet for many longer-term residents the glue has set. The Sierra is their home and one they never want to leave.

Jeffrey Dupras, a firefighter for the U.S. Forest Service who lives in Quincy, marvels at the explosive power of the recent wildfires. The fire that destroyed Berry Creek on Sept. 8 traveled 30 miles in a single day, something no one there had ever seen.

Yes, fire is a concern in Quincy, Mr. Dupras said, but if he lived in Los Angeles or San Francisco he might have other worries. 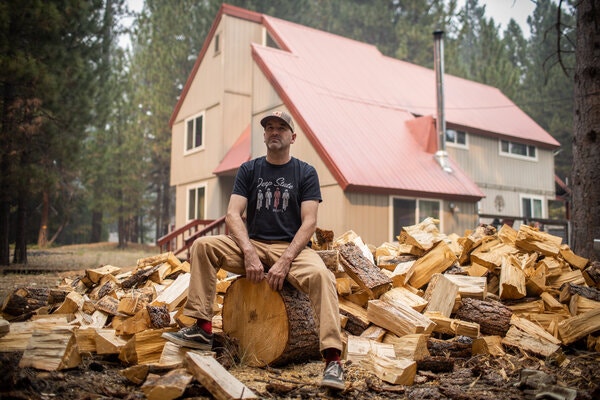 “I wouldn’t want to raise my kids anywhere else,” he said of the town, where he has lived for a decade and a half.

To an outsider, the wildfires appear terrifying, he said. But to the community they are an inescapable reality, one that requires constant vigilance.

“This community has been inoculated by fire,” he said. “It’s their olağan. It’s my olağan.”

Is Europe heading for a K-shaped economic recovery?