WASHINGTON — When news broke on Friday that Justice Ruth Bader Ginsburg had died, President Trump was just five minutes into a campaign rally in Minnesota and aides opted not to pass word to him onstage. If he announced the death of the liberal justice from the lectern, they feared the crowd would cheer.

But cheers that would have looked unseemly one night were welcomed in another form a night later as the next rally crowd chanted, “Fill that seat!” To a president lagging in the polls, the chance to fill a Supreme Court vacancy has become a political lifeline, a chance to mobilize supporters and talk about something, anything, other than the coronavirus that has killed 200,000 Americans.

Whether it will ultimately change the outcome of the campaign is up for debate given that Democratic voters may be equally energized. But for Mr. Trump, nothing else has been working and so he has propelled himself, his Republican allies and the country into a breakneck race to confirm a successor to Justice Ginsburg before the Nov. 3 election, bulldozing past the precedent his own party set four years ago in a gamble that the political payoff will outweigh any political cost.

Even as he presses ahead, Republicans remain uncertain whether it would be better to hold a confirmation vote before the election or announce the nomination and start hearings but leave the final decision until a lame-duck session afterward. If they act before the election, they may lock in a conservative majority on the court for years. But if they hold off they may give voters on the right greater incentive to turn out to keep the Senate Republican, ensure Mr. Trump’s re-election and make it more likely that his pick is eventually seated.

Senate Republicans have made it clear in the last few days that the votes are there to confirm a nominee sight-unseen before the election, but Senator Mitch McConnell of Kentucky, the party leader, has yet to commit to that timetable as he weighs the pros and cons. “There are different points of view about that,” Senator John Thune of South Dakota, a member of the Republican leadership, said on Tuesday. 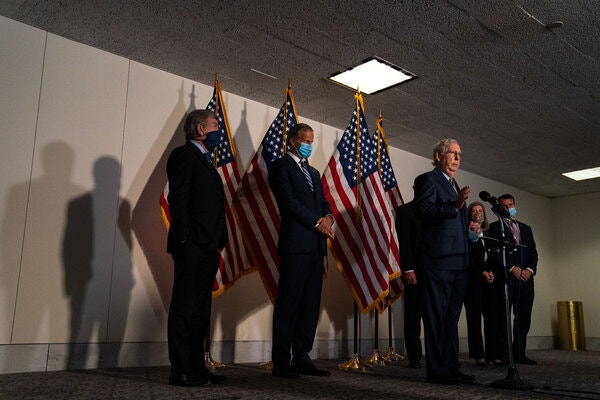 If they pursue confirmation in the 38 days between Saturday, when Mr. Trump said he would announce his choice, and Election Day, they will be trying something that has never been accomplished before. While plenty of Supreme Court nominees have been confirmed in presidential elections years, none has ever been approved so close to the election itself.

The closest any came were three nominees approved in July of the election year, more than three months before the voting, and two of them were unopposed and passed on a voice vote. The last time any seriously contested selection for the court was rushed through so quickly at any point in the election cycle, counting from the date of the original nomination, was in 1949.

The White House does not mind engaging in an argument over ramming through a nominee and in fact appears to relish it. Kayleigh McEnany, the White House press secretary, showed up for a briefing on Tuesday with an opening statement energetically accusing Democrats, rather than Republicans, of busting through longstanding traditions because some liberals advocate retaliating for an election-year confirmation by adding more seats to the Supreme Court if they win the election to offset Mr. Trump’s appointees.

“If you don’t get your way, Democrats will blow up the system,” Ms. McEnany said. “They will change the system. They will trample on the Constitution.” In fact, the Constitution permits changing the number of seats on the court just as it permits the president and the Senate to confirm a nominee at any point in the election cycle, but neither has been the norm in çağdaş times.

What Ms. McEnany did not address at her briefing until asked by reporters was the pandemic on the day the nation passed the grim milestone of 200,000 killed by the virus. Washington National Cathedral tolled its bells over the weekend in memory of the dead and a volunteer organization planted 20,000 American flags on the National Mall to mark the occasion, but the White House took no formal notice. 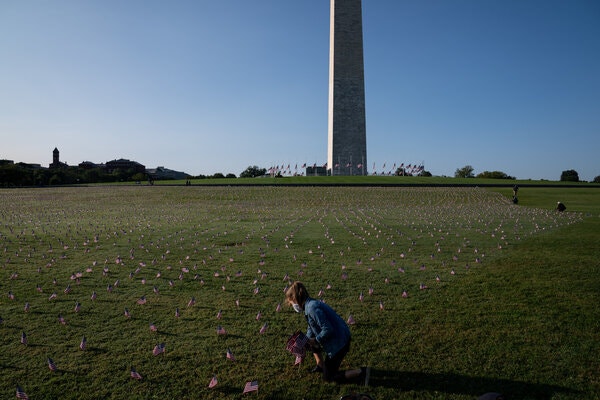 Robert Jeffress, the evangelical pastor of First Baptist Church of Dallas and a prominent ally of the president, wrote on Twitter over the weekend that for the president, the court fight meant that the coronavirus was now “nothing but background noise” for voters.

“The Supreme Court fight is hugely helpful to Donald Trump because it reframes the election,” said Alex Conant, a Republican strategist. “A couple of days ago, the biggest issue in this election was Donald Trump’s handling of the pandemic. Now it’s a battle over the Supreme Court.”

Sam Nunberg, who worked on Mr. Trump’s 2016 campaign, said confirmation of a conservative justice would increase “turnout of disenchanted faith voters” and appeal to Catholics in crucial states. “This is going to be a late deliverable, which combined with a Covid vaccine will be substantive issues for late deciders,” he said.

But Democrats said Mr. Trump’s team was overestimating the benefit, which they said would be offset by their own voters’ anger over the replacement of Justice Ginsburg, a liberal icon, with a conservative who would work to undo her lifetime of rulings. Democratic donors chipped in $160 million online through ActBlue, the leading site for processing digital donations, in the first three days after Justice Ginsburg’s death.

“Any change in topic may feel like a relief to the White House compared to Covid, but this issue is far from a political winner for him,” said Brian Fallon, the executive director of Demand Justice, a progressive group fighting Mr. Trump’s judicial nominations. “Democrats are galvanized on the court like we have not seen in decades.”

With the future of Roe v. Wade presumably on the line, the confirmation fight will certainly inject abortion into a race that had not focused on it until now. Anti-abortion voters have long been a bedrock of the Republican coalition and often more devoted to casting ballots on that issue than their counterparts. But polls show the broader electorate supports retaining Roe v. Wade, and Democrats hope that if the ruling appears to be threatened it will activate voters who support abortion rights. 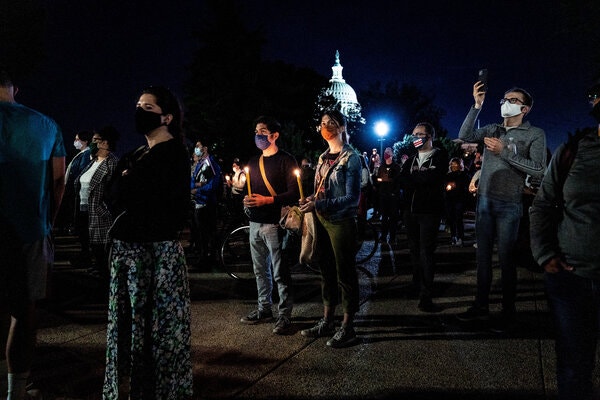 Cornell Belcher, who was a pollster for President Barack Obama, said a court fight might bring home some wayward Republicans, but at a cost. “The downside is potentially large and impactful, now and down the road, for Republicans as it may reinforce a trend that is already emerging in full — further distancing college white women from the G.O.P.,” he said.

The question of when to hold a confirmation vote — before the election or after — is more than tactical. While the White House would never say so publicly, by pushing to confirm a choice before voters render their judgment on him, Mr. Trump is effectively conceding that he could lose and therefore it would be better to fill the seat immediately.

Some of his Republican allies, most vocally Senator Ted Cruz of Texas, have argued that they need the extra justice on the court by Election Day to be able to rule on any disputes that may arise from the November contest, a likely prospect given the many lawsuits over rules and mail-in voting already in the courts and the president’s constant assertions that the election is being “rigged.”

Some Republican strategists said it would make more sense to proceed with hearings while holding back on a final vote until after the election to let conservative voters know what is at stake and give them a reward, in effect, for turning out. The risk would be that if Mr. Trump loses to former Vice President Joseph R. Biden Jr., the Democratic nominee, it could complicate a lame-duck confirmation if enough Republicans balk at approving the choice of a president rejected by the voters during the period before Mr. Biden’s inauguration.

But Republicans might proceed even then. Asked by CNN if Republicans would approve Mr. Trump’s nominee even if Mr. Biden is elected, Senator John Cornyn of Texas did not hesitate. “You mean while we’re still in our term office and President Trump is?” he said. “Of course.”